Thor of the Common Man @ the Cockpit Theatre Review

Written in the 18th Century, Yuan Mei‘s Censored by Confucius: Ghost Stories created shockwaves within the puritanical world of the Qing Dynasty, as it approached taboo subjects such as corruption and revenge in a comical manner. This, combined with the fascination of the God of Thunder in Chinese culture form the basis for writer and directer Zhao Miao’s Thor of the Common Man… 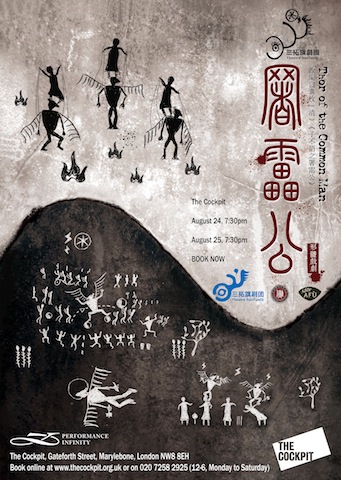 Performed by Chinese performance group SanTuoQi, Thor of the Common Man depicts the God of Thunder’s tireless attempts to rid the world of conflict and restore peace, however his efforts appear thankless, resulting in him being cast out by the people. The graceful depiction of  Tao (meaning ‘the way’, ‘path’ or ‘principle’ in the religion of Taoism) by a member of the cast created an air of authority as she summoned the creation of the Earth with a sequence of arm movements, similar to that seen in T’ai Chi and accentuated by her water sleeves. One by one, the cast members elevated from the ground, revealing miniature shadow puppets that ran across the stage and the ensemble, a fun element of the production that proved to be a highlight. With only segments of text displayed on the projector, and the absence of spoken words, I felt lost at moments, unsure of what was happening. This however only added to the mysticism of the piece, which I found compelling none the less. The characterisation of the God of Thunder was the source of comedy for the evening, as his bird like mask and movements illuminated the stage. There were multiple fight scenes within the piece that I felt lacked diversity, therefore resulting in some of the sequences seeming repetitive. Thor of the Common Man was an enjoyable production to watch, with a great combination of ensemble work, Shadow Play and physical theatre so therefore I give it a 4/5.