In Dead Baby Frog, Sofie Hagen brings to light the story of her emotionally abusive grandfather through comedy while she discusses essential topics including feminism, body image, mental health, and finding one’s own voice. 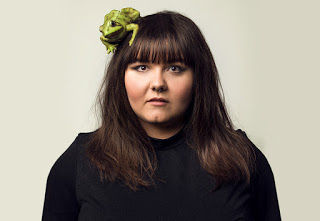 Subtly intertwining these themes with great detail, she leaves you questioning how these issues affect the world. She inspires as she discusses how we should not let ourselves slowly burn in boiling water, but should instead stand up for ourselves, make noise, and fight for what we believe.

Forming a strong connection with the audience, she fills the theatre with a silly and yet piercing energy. Hagen’s quick wit and comedic timing are outstanding, but she brings a deep honesty and openness to the audience that most performers do not. Sharing haunting stories with vivid imagery about her grandfather, she depicts how his constant control affected her family. She shares how this abuse led to extreme anger issues through both hilarious and punchy anecdotes; having you crying with laughter one minute and disgusted at yourself for laughing in the next.

Hagen’s stories and discussions of societal issues are so strong it leaves you wanting more. Unfortunately in this instance this is not an entirely positive statement. She spends a solid 20 minutes at the beginning talking about her show and making jokes about random things such as audience members bringing her chocolate. This is still entertaining, but when she has so many compelling things to say it leaves you with intense anticipation. This long introduction and her habit of frequently touching her nose or covering her mouth feels like a touch of confidence is missing. She is an extremely influential writer and performer, but when she entirely believes in her work she’ll be on her way to becoming unstoppable.

Hagen is not only a powerful writer and performer, but person as well. She invites the audience into the theatre with a smile as she hands out programs and graces the gleaming audience members goodbye in the cafe. She leaves her audience inspired and ready to fight for change, but she also takes care of them along the way. She makes it clear ahead of time that her show is an anti-anxiety show and any special requests can be made. She provides a trigger warning at the beginning of the show and shares that if anyone feels the need to leave for whatever reason she will not judge or make fun, she will understand. Her natural compassion and fiery writing make her a beam of light and a symbol for change that can take place in such a chaotic world. 4/5
Review written by Rebecca Ozer

Dead Baby Frog is currently showing at Bedlam Theatre until Monday August 28th 2017 as part of this year’s Edinburgh Fringe Festival. For more information on the production, visit here…