Up the Hill Jackie takes the audience on a journey with two Irish sisters, in which Rita forces young Jackie to travel to England to get a legal abortion. It holds promise of being a feminist story that allows viewers to question sisterhood, mental health and ownership of one’s body, but unfortunately it falls short. 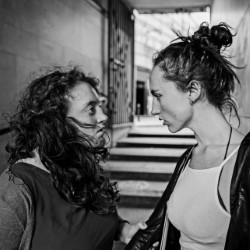 Áine Ryan’s writing takes the audience through many powerful twists and turns, but falls into the trap of becoming vague for the majority of the play. It feels like a story that has been told many times until the last fifteen minutes of the play. Although the twists are exciting as the play nears an end, it would be that much stronger if there was more in-depth plot along the way. The characters could have more unique information revealed about them earlier on in the play. By the end, the audience learn interesting anomalies of the sisters, but for the bulk of the play they are stereotypes of the stern older sister and naive younger sister. The plot zooms through so many different locations that it would be better suited for a short film, which I believe could be very successful. Although the development with plot and character could happen more consistently, there’s a beautiful shell of a story. The strongest theme of the piece is mental health, and how vulnerable teenagers can be heavily affected by unfulfilled dreams and lack of affection.

Unfortunately the acting is very inconsistent and somewhat erratic. Erin Ryan is full of life, with curiosity racing through her and a raw, believable connection to Jackie. However, at times she plays Jackie too young; it feels as if she is as young as 12 rather than a late teen. Part of that may be due to Jackie’s personality being written a bit too youthful for her age. Unfortunately Áine Ryan shows a weak performance. She is disconnected from her body and voice, and falls into extreme jolty and robotic patterns which cause her acting to be highly unbelievable. She doesn’t show naturalism and I don’t believe in her character. This is especially problematic with such a minimalistic play that relies on unbeatable acting. Áine Ryan is a talented creator and she has the potential to bring fantastic stories to life, but if she wants to perform her stories on stage she should revisit some training.

Up the Hill Jackie misses the mark a bit, but holds promise for the future. With slight re-drafting and potential shifts in cast, Up the Hill Jackie will be on its way to becoming a powerful tale of sisterhood and questioning of ownership. 2/5

Up the Hill Jackie was performed at Bedlam Theatre as part of The 2017 Edinburgh Fringe Festival. For more information on the production visit here…