Ever wondered who the faces were behind all of the reviews written on Theatre Full Stop? Well here is your chance to meet the team! 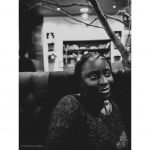 After graduating from East 15 Drama school, where she studied BA (Hons) World  Performance, Lucy began writing theatre reviews for lifestyle blog, Yin & Yang. In 2012, she was lucky enough to perform at the Opening Ceremony for the London Olympic Games, a once in a  lifetime opportunity that could not be missed! In 2013, after realising just how much she enjoyed  writing about theatre, she started writing her own blog, Theatre Full Stop, where she continued to  watch a wide range of performances and interview cast members and creatives. Lucy is a trained primary teacher, so if she’s not writing about the theatre then she is busy teaching the future generation! Follow Lucy on twitter: @lbasaba