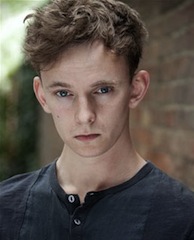 Everybody has a story to tell, whether you’re a Costume Designer or a Production Assistant. To acknowledge this, the Adrian Pagan Playwright Award was launched last year in memory of the late Stage Manager who also enjoyed success a Playwright. Alongside working as an actor, having performed for the RSC and starring in the BBCs Casualty, Thomas Pickles can now add the credible title of award winning Playwright to his CV! A play that was 11 years in the making, Thomas talks ahead of opening night about his inspirations, his love of writing and why being a Magpie could be a good thing!

Your production of Dead Party Animals is the first recipient of the Adrian Pagan Playwright Award, how does that feel?

It feels great! It’s really good! The prospect of getting my first play produced is overwhelming, but brilliant as well! I’m chuffed to bits! I had this play, so I thought, what can I do with it? I saw the competition online and I was shortlisted! It’s been fab!

Had you written beforehand, or was this the first production you had written?

I’d always written since I was a little boy, I’ve always wrote stuff, but Dead Party Animals is my first play. I’m 23 now, and it’s been working around my head since I was about 12. (At) 15/16 (years old), I started to scribble stuff down and it’s happening now! I’m chuffed!

The award is specifically targeted at theatre professionals, from actors to accountants. Had the thought of becoming a playwright ever crossed your mind? Was it an aspiration of yours?

Yes! Genuinely, it sounds a bit nostalgic but I’ve always written and I’ve always acted, the two have always (been) happening at the same time. When I was younger, I had this vague idea of how you become an actor, I knew it was difficult, but I knew that you could go to London, you could go to Drama School, you get an agent and you go for auditions. It’s obviously harder than that, but that’s what I thought. But with writing, I never knew what to do, or how to do it, I just wrote stuff for myself. Then when I was in London, I stumbled across poetry and got swallowed up by that and I thought it was brilliant! So I started to do that, I started to do some little gigs. ‘Dead Party Animals’ is quite poetic and it grew from that environment really. I found the competition online and thought that sounds like me, I’m an actor, I write as well and I’d like to be a playwright. It seemed like the perfect fit.

Are you inspired by any poets in particular?

I remember seeing a guy called Polar Bear who’s real name is Steven Camden. He had this video on YouTube called ‘Jessica’ and it went viral, it’s incredible! Sabrina Mahfouz is an inspiration as well. I’ve always liked reading and I like poetry. I got a bit of a reputation at school for liking poetry and I grew up obsessed with Eminem and liking my Hip Hop. I’ve always liked words and language and telling stories.

Could you describe what the play is about?

It’s about a boy and it’s set in the North West of England in Lancashire, and it chronicles a night out in an old Mill Town. (There’s) a group of girls getting ready to go out, a group of boys getting ready to go out, one boy in particular, and the night is all right. It gets steadily raucous, and then there’s a flashback and we learn that this group of mates were on holiday in the summer, in Malia, (in) a trashy Greek Island resort. It’s a lads holiday, and something happened there which comes to get him. It’s very poetic as well; we spoke about in rehearsals as being like an album, as if it’s like an EP almost.

The performance is in the structure of a monologue, how do you find being onstage on your own?

I’ve never done it before! My first show was with the RSC, which was a massive cast. Then my second job was a slightly smaller cast. I’ve just finished doing a two-hander and now I’m doing a one-man show, so I’ve whittled my way down!

How does it feel, do you find it difficult? Easier?

I guess it’s different because I wrote it, so that gives you a bit of confidence. It’s nice, it’s challenging but I do miss having someone on stage. The theatre that we are in is small and intimate, and I’m really looking forward to just telling a story to people every night!

What inspired you to create the piece?

All the characters are about 17, and I’m 23 but I don’t feel, (that I’m) in that kind of vacuous time period. The world’s a scary place and I remember when you’re in love, (when) you’re 17/18 or even early 20s, it consumes you; it’s the only thing in the world. The play is about a breakup of a relationship and I just remember thinking, God! Everything’s huge! It’s like everything in the world is massive when you’re that age. I was inspired a lot by pop culture; It’s inspired by Facebook and Twitter as well, like how news travels. That sense of a Saturday night and going out from 6pm onwards and before you know it’s 3 in the morning!

How does it feel to see your play materialise from page to stage?

Seeing the tech rehearsal and seeing the brilliant lighting design and sound design all coming together, it’s surreal, it really is! The Stage Manager’s cueing the play so he’s reading out lines for my play, it’s weird! It’s weird hearing people say Dead Party Animals! I don’t really want to get sentimental about it, but you can’t help yourself. When something’s been in your head for ages (and) suddenly people are talking about it! Things that are in your head are actually now real things, which is nice. It hasn’t sunk in yet!

How involved are you in the rehearsal process?

In rehearsals, I’ve thought of myself as an actor more than a writer because it will be detrimental to it really. I need an outside perspective, I need a Director, I need an Assistant Director, I need a designer, one person can’t do everything. When I’m on stage doing it, I’m on the inside looking out, and sometimes you need someone on the outside looking in. Often, dramaturgically I help out, and I know what the play is about and I know what beats I need to hit and the rhythm, but there’s bits where the director’s sat and he’s gone, ‘I don’t quite get that’, and I’ve taken a step back and I’ve felt yeah, it’s not really clear, so I’ve changed bits. With music and light, yes I’ve had a say but then you’ve got to appreciate that the designers and people involved are really talented people, so you’ve got to trust them and let them get on with it really.

What advice would you give to aspiring playwrights out there?

Just write! If you write 20/40 pages of something, and you finish something, at least you’ve got something then. If you start an idea and don’t finish it then you’ve got nothing. Don’t be scared to fail, just write stuff! Watch people, I spend loads of time just watching and listening to people, I’m really nosy! Don’t be afraid to be a bit of a Magpie! Write down what you see!

Thomas Pickles is currently starring in his award winning play Dead Party Animals which is on at The Hope Theatre. For more information on the production, visit here…