The 20th June witnessed the start of the Greenwich and Docklands International Festival 2014. Throughout the day various sound checks and rehearsals attracted muted attention, but nothing compared to the enthusiastic turn out for Acrojou‘s outdoor show, ‘Frantic’. 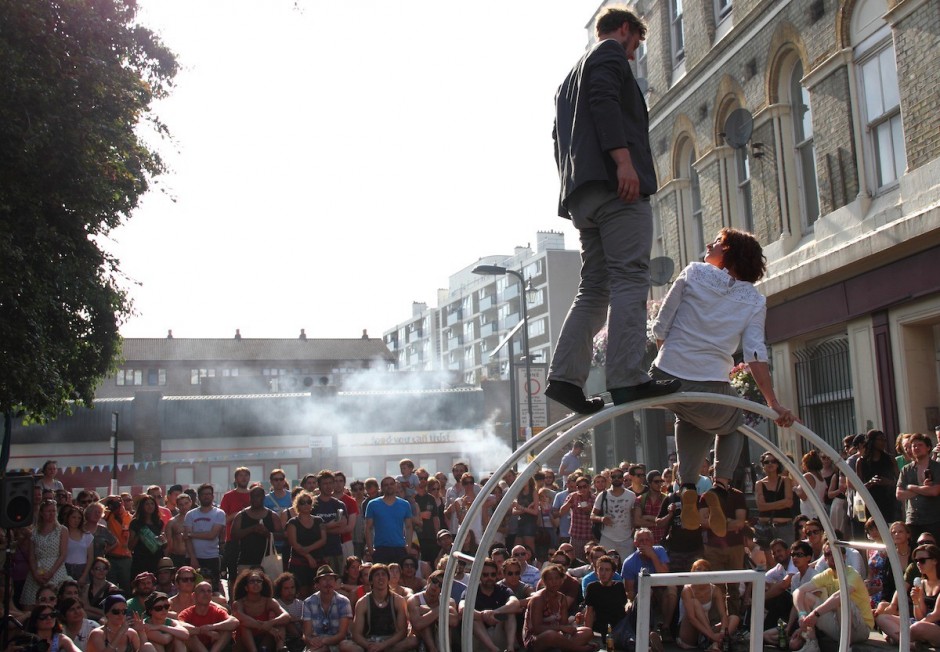 Describing itself as a combination of acrobatics and dance-theatre, with use of an intriguing central prop, ‘Frantic’ attempts to comment artistically on the 21st century’s need to always be busy. The jarring choreography at the start of the piece is a good visual exploration of the effects of trying to fit everything in whilst simultaneously acknowledging our longing for escape. The use of audio, however, is what really cements this message. Part of the musical score is a monotonous list of activities we all try valiantly to achieve, like eating properly and not missing out on any opportunities. The juxtaposition of this spoken list with the fluid choreography and instrumental music that follow once the escape has been achieved is what really sells the show. The use of the bespoke wheel structure also acts in contrast to the stifling start, and it is clear from the expert handling of the prop that a lot of effort and rehearsal has gone into the performance.

The two performers – one male, one female – work well together and the partnered acrobatic and dance sequences demonstrate a great deal of precision and trust. There’s also great synchronicity and though never fully shocking the audience with daring stunts or dance moves, it is clear from the gentle, audible gasps that the diversity in using the wheel was appreciated (and later, greatly applauded too.) Perhaps in deference to the bespoke wheel structure, ‘Frantic’ seems to promote a certain cyclical nature to its performance. The jilted choreography that opens the show returns near to the close and the glass of water that first introduces the two characters to each other then manifests at the end, in the form of large sprinklers (although judging by the squeals in the front row, it wasn’t just the performers who fell victim to the water!)

‘Frantic’ drew a substantial crowd, all encouraged to sit on the floor to allow as many members of the public to watch as possible. Received well by an audience consisting of all ages, ‘Frantic’ set the Greenwich and Docklands International Festival off to a very good standard. 3.5/5

‘Frantic’ will be showing at Cutty Sark Gardens until Sunday 22nd June as part of this year’s Greenwich and Docklands International Festival (GDIF). For more information on the production, visit here…