An Audience With Quincy Jones @ the Britten Theatre Review

What does the first song to be played on the moon, aptly named Fly Me to the Moon famously sung by Frank Sinatra… The iconic Austin Powers theme tune Bossonova… And Michael Jackson‘s timeless album Thriller all have in common? 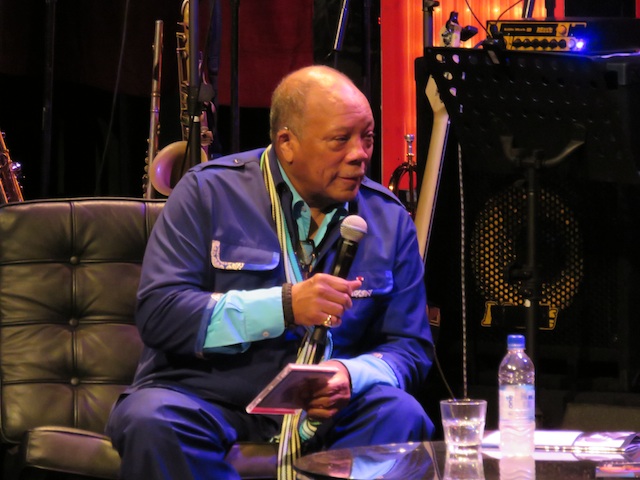 To even begin to note down the accomplishments of this musical genius is nothing short of Herculean! Where do you even begin? With a career spanning over 6 decades, Quincy Jones‘ contribution to the musical landscape of much of the 20th century has showcased just how much of a game changer he is. With a record breaking 79 Grammy nominations, Quincy has walked away with a staggering 27 Grammys acknowledging his talents as a musician, composer, arranger, producer and of course, a legend! Having been mentored in his teens by the late Ray Charles and Miles Davis, Quincy is never quick to forget his jazz roots, stating in his interview with Paul Gambaccini just how important it is to learn the history of your chosen art form in order for you to progress as an artist.

An Evening with Quincy Jones teleports the audience through a medley of hits, with the multi talented All-Star Collective infusing the auditorium with a carnival-esque vibrancy, emulating the complexity of sound made famous by Quincy. Artists such as Beverly Knight and Jocelyn Brown raise the roof with powerful performances whilst Solene Fleming and Mica Paris mesmerise the audience with soulful yet lyrical numbers. Sarah Jane Morris smartly adapts Billy Paul‘s Mrs Jones to Mr Jones in accordance to the show’s star, whilst Susan Black hypnotises with an intense yet unique performance.

A show of two halves, the evening mellows as Quincy answers questions asked by former Radio 1 DJ Paul Gambaccini. A chance to hear from the man himself, the interview covers career defining moments from being nominated twice in one year for film compositions, including his work on In Cold Blood in 1967, to working with the iconic voice which features on Michael Jackson’s iconic Thriller, Vincent Price. These moments are gold dust when heard from the man himself, however it’s a struggle to hear what is being said a lot of the time due to microphone issues. This is a real shame as this upstages what Quincy has to say, leaving the audience questioning as to what exactly has been covered.

The evening briefly takes on the form of a Q & A, whereby the audience are given the opportunity to ask Quincy questions about his career. This section of the evening is very brief, which is a shame as it doesn’t allow for enough audience interaction. The evening fittingly ends with a performance of Michael Jackson and Lionel Ritchie’s charity single, We Are the World, sung by the Royal Docks choir in order to emphasise the importance of community and working together. An artist that has provided the soundtrack to many of our lives, Quincy has created a musical legacy that will influence and inspire for future generations. 3/5

An Evening with Quincy Jones was on at the Royal College of Music on Sunday 28th September. For more information on Quincy Jones, visit here…