Amo’s Theatre most recent production brings us Molière’s classic French comedy: Tartuffe. This play tells us of this religious hypocrite who manages to enter into the sinful life of Orgon, the owner of a speakeasy masked as a church, who seeks redemption for his past life. Orgon is deluded by the apparent virtues of Tartuffe and places him above his wife and children, welcomes him into his house and so we are left to witness the damage this devout liar inflicts on this family’s life. The advantage of this play is that its words and message of falsehood and hypocrisy seem to be timeless, it is easy to make sense of it in the modern times or, in a more creative twist, to set it in 1929 in Louisiana as director Chris Lawson chose to do. 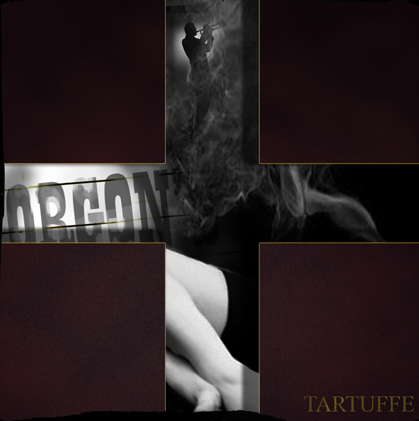 The start of this performance has undoubtedly put a smile on everyone’s faces as the main character Tartuffe welcomes the audience in as if welcoming them to church. With intense praising and gesticulation we are encouraged to sing along and praise Jesus Christ. It is an energetic and delightfully interactive beginning that sets the tone for the rest of the play.

This is a highly physical performance and all the characters bring an incredible energy and presence to the stage. The production is fortunate to have a very strong cast that never drops the ball in this hectic storytelling. Tom Cornish embodies Orgon’s character and does so in an entrancing way. His reactions are sharp, his physicality is bold yet accurate and he knows how to bring the wit and comedy this play begs for. It is impossible not to watch him. Orgon’s wife is brilliantly played by Norma Butikofer who delivers a strong and confident Elmire, a portrait of the modern fierce independent woman. John Fagan’s Tartuffe is sneaky and gifted in deceit as it should be, an intelligent crook especially good in the use of reverse psychology. Furthermore, the expressive Philippa Tatham brings the tempestuous Dorine to life with very good comic timing throughout the play. In truth, all the characters with no exception have made me laugh with their particularities and their very distinct physicality and manners on stage.

Further to the bubbly environment surrounding us, the music added very nicely to this play, with a grand piano on stage and Mauricio Brandes singing and playing some very nice and familiar jazz tunes.

It was a very entertaining night out at the Space, a theatre that I believe should be more frequented as productions like these deserve to sell out every night. 5/5

Tartuffe is currently showing at the Space Theatre until Friday 25th October. For more information on the production, visit here…