There are three distinct modules to Daddies Don‘t Cry. A conversation, a dance and a monologue. One of them is fascinating and beautiful and is sandwiched between two monotone performances that doesn’t do anyone involved any justice. When entering The Loft an impressive stage is there to greet you. It looks like a massive piece of shattered glass, an apt metaphor for the life of the child on which the performance centres. The set ends up being the highlight of the play, and even then felt underused. 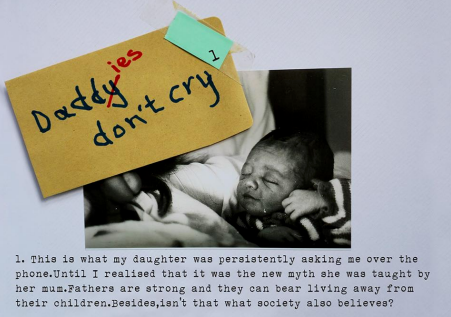 According to the director the object of the show is to spark conversation about the effects of divorce on estranged parents and each module in some way demonstrates this. Strangely the mother is denied a voice, only being portrayed in an argument with the father and not getting a monologue like he does.

People can be at their worst when divorcing and it would have taken extraordinary charm from the actors to be likable with the stories the play provides them with. They just aren‘t up to it. Worst of all, they were directed to keep a very level tempo and energy throughout the play. Its not often it is right to compliment a play on its brevity, this time it is.

The jewel of the play was the dance performed in the middle of the show. Unlike the straight play scenes it was creative and engaging. It should have been made even more central, or been allowed to end the play, in order to leave with the audience on a high note. That being said the subject matter lends itself to great drama and if the actors were to take their cue from the passion of the dancer, this might turn into a great piece.