A Series of Increasingly Impossible Acts @ The Tricycle Theatre Review

A Series of Increasingly Impossible Acts by Secret Theatre is one of the company’s seven shows since it was formed by the Lyric Hammersmith in 2013. This show had success at the Edinburgh Fringe 2014 and toured parts of the UK before landing at the Tricycle Theatre in Kilburn. 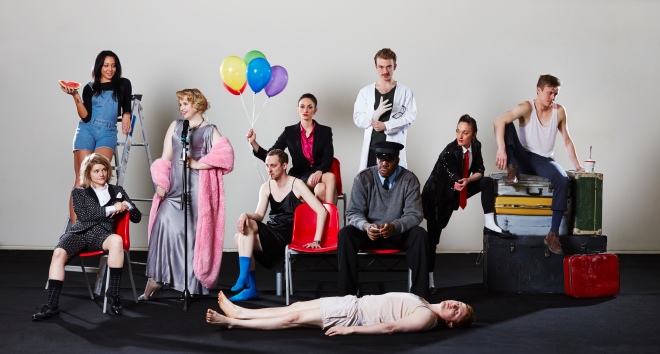 As I entered the performance space, the members of the cast, wearing running clothes and jumping around a relatively spare stage, greeted, and chatted, to me.This informal and warm atmosphere continued throughout the show as, from a hat, our “protagonist” was chosen and the actors proceeded to attempt the series of increasingly impossible acts. The acts ranged from physical, such as how long an actor can keep his hands in a bucket of ice, to tasks about their own vulnerabilities such as listing their fears. The show follows in the trend of pseudo-naturalistic shows which seem to be fashionable at the moment, where the actor does not play a character but plays themselves and draws on their own experiences. The show is very cathartic to watch and the whole cast have a natural charm which makes this experience very enjoyable to watch.

Some moments in the show were jarring. For example, when two performers had to perform a scene from Romeo and Juliet, though not performed badly it did not carry the same honesty as the improvised moments; or when you see the protagonist physically struggling, or answering a list of questions with painful truth. These moments however were few and far between and there were many more highlights. Secret Theatre are a very exciting company who clearly have a lot of trust in each other and their work. I would highly recommend this show. 4/5

A Series of Increasingly Impossible Acts is currently showing at the Tricycle Theatre until Saturday 31st January. For more information on the production, visit here…