Touring this year after a successful run at last year’s Edinburgh Fringe Festival is The Paper Birds with their verbatim show Broke. The show was created using interviews and questionnaires about money, debt and consumerism. Although it doesn’t come to any solid conclusion on the matter of money, it does offer many different viewpoints and insight into how we view finances today. 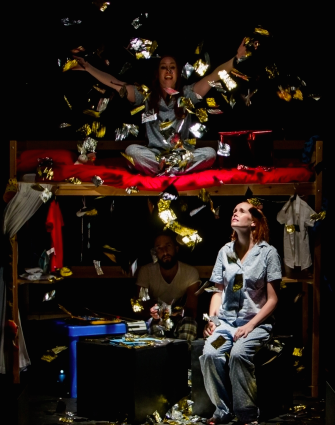 The set is sparse, with only a few blocks, two projectors and a child’s bunk bed and den in the centre. This is a sign of things to come as The Paper Birds have chosen to use this childlike theme throughout. They take the metaphor of playing with money quite literally – with toy phones and credit card machines, music playing live from a xylophone and telling stories from a children’s book all adding to the innocent effect. The projectors are used in various scenes to show graphs, TV footage and drawings among other things. This multimedia approach really adds to the visual effect of the piece.

There is not a clear storyline as such, although there is one recurring character; a single mother who is broke and on benefits. She depicts and reminds us of debt and poor finances at its worse throughout the performance. There are other non-linear scenes, each done in a creative and interesting way, from comparing getting a bank loan to being on Deal or No Deal to using sock puppets as politicians in a debate! This is not only an engaging performance technique but also allows you to take on board their message in a fun and interactive way.

The three performers, who also devised, directed and produced sound for the show, work very well together. They move from scene to scene with wonderful energy. Sometimes their energy over spills a little, causing them to drop lines. However, their accents and physical portrayal of the various interviewees really brings across the wide range of people they interviewed and their different viewpoints. In addition to all their other creative ideas they use wonderful movement sections for ‘fast-forwarding’ interviews, and a beautiful intimate piece showing a woman up all night from worry over her crippling debt.

This piece has struck the right balance between theatre, art and important modern issues. It looks deeply into what poverty, class and debt means to us today in a concise and clear way. The inventive ideas are incredibly entertaining and the different views you see will have you debating and thinking long after the show is over.

Broke is currently showing at the Theatre Royal Bath until Friday 30th January. For more information on the production, visit here…