The Mountain Bluebird is ragingly current, yet disconnected. It is a seemingly complicated play that, when you break it down, becomes a simple one. It is the debut of playwright Jamie Eastlake and posesses that charming thing first plays often have, over-ambition. 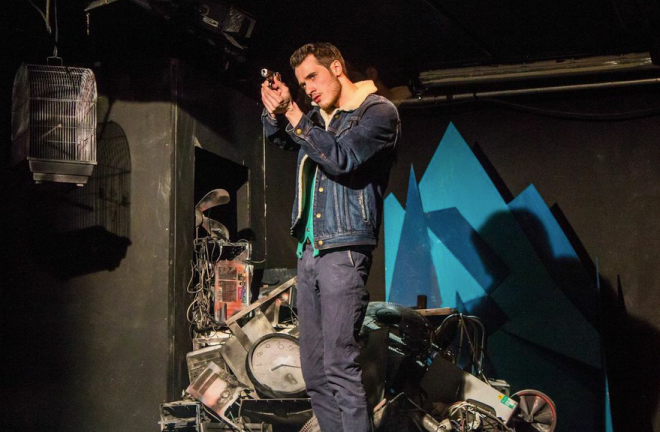 The complicated story follows a club-promoter and wannabe hustler called Josh as he tries to fulfil his addiction to likes and interaction over the internet. He hits on a fifteen year old Amelia, who is trying to find herself while her family rips itself a part. Her sister attempts to get her away from their father, who fills his afternoon by organising Britain First rallies. I won‘t give a way how it all goes, the twists in the story are worth the price of admission alone. As are the Tennyson poetry, Harry Potter wordplay and Pocahontas qoutes.

The story raises enough questions and themes to fill three plays. A young man fighting, seemingly delusionally, for his place in the world. The effect of social media on the way we communicate, family ties and the small matter of the War on Terror and the rise of the anti-immigration sentiments, which provide the backdrop.

The sheer amount of topics and plot points become exciting in a way. I wouldn‘t be surprised if we see echo‘s of these themes in Eastlake‘s future work. His way of dwelling into topics using monologues is a classic motif for a reason and further depth in exploring these themes would not go a miss.

Victoria Gibson, Jennifer Thompson, Isaak Robinson and Dermot Dolan all do more than their fair share of work, and are a joy to watch. Jennifer and Victoria have great sibling chemistry and Dermot‘s intensity saves what could have been an almost absurd character into a real menace. There is barely a hint of him commiting physical violence but he oozes menace. A scary zealot, driving the story.

The set is a beauty. Post-Apocalyptic mounds of technology cover the stage, splitting it up in section and setting the tone. For a play as rooted in the modern world as this it is a strong, and wrong, choice. It’s distracting and not needed. A work of art no doubt, but not suitable for this play. It also buries the strong under current of humour in the play, perhaps a deliberate choice. An overly ambitious, beautiful, funny and occasionally horrifying play. Tackling modern issues with memorable characters in an intimate venue giving an opportunity to an exciting new playwright. Need I say more? You won‘t regret seeing this. 4/5

The Mountain Bluebird is currently showing at the Courtyard Theatre until Sunday 15th February. For more information on the production, visit here…