Tzedakah Theatre speak to Theatrefullstop about the importance of raising awareness about Slavery and Trafficking. 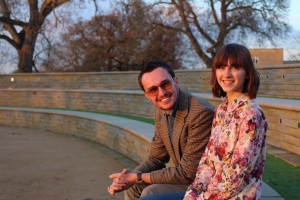 There are currently 36million slaves in the world today – which is more then there have been at any other point in history. More than that there are between 10,000 and 13,000 slaves in the UK alone. So, although we may think of slavery as something from history or as something that does not happen in our country, the statistics prove that it is a big issue today. Hoping to raise awareness of this important issue are Krissy Penton and Mykel Elledge. They are the co-founders of Tzedakah theatre, a company which is currently working to raise the awareness of slavery and human trafficking. I caught up with them to discuss how the company is using drama to educate people on this issue.

Who are you and what do you do?

KP: We are Tzedakah Theatre. We are a new Bath based theatre company whose aim is to tackle issues of social injustice through theatre – mainly through workshops and performances. We want to inspire, educate and challenge people. Our focus at the moment is the issue of human trafficking in the UK.

How did Tzedakah Theatre start?

ME: At some point in our life we both became really passionate about the issue of human trafficking and slowly we started to realise more and more about it and how it was an issue. Not just an issue in the world today but an issue here in the UK. In our second year of our drama degree (which we are both about to complete) we did a module called Applied Theatre which looks at how drama can be used as more than entertainment in many different ways. It can be used as counselling, to tackle issues of social injustice, to raise awareness or to challenge a political status. Within that module we both grew a passion for using drama for social issues and so we got talking about a project we were offered to do in our third year – which was to put on a performance of any kind. We thought this would be a great opportunity to do something we are really passionate about; raising awareness of human trafficking. The problem with it we’ve realised is that many people don’t realise that it is an issue. We thought that drama is a great way to raise awareness. So, we started to do that for our project and then we realised that we didn’t want to leave it there – so we decided to set up as a company.

Why is human trafficking an important issue to you?

KP: A lot of people don’t know that it’s an issue here which is why we wanted to make that known. Also, you can read all these statistics but when you actually realise each of these statistics is an individual person it’s really heart-breaking. That is the reason that I’m so passionate about this because it’s not just a statistic. Those are real people in really horrendous situations.

ME: And there are other people who are in situations which are horrible situations but with modern day slavery it’s just something that we think should never happen. That is a right that no one should have taken away from them. Their freedom, independence, who they are as an individual just being ripped away from them. Their identity being taken away from them. That’s why I think we are really passionate about this because it’s something that shouldn’t happen to anyone and it’s actually happening to so many people. Even if through our work we got to see one person’s life change because of us I think we would consider it such a success. We look at this as individual lives.

How are you using drama to raise awareness? And how do you think drama helps to spread the message?

ME: The ways that we felt would be most effective for us were to do two very separate things. Firstly, to run workshops with groups of people who knew that this was the issue, that this was what we were tackling and knew they were going into a workshop about this. We would contact people and ask them to run these workshops with them, whether they be part of university groups or schools and colleges or part of community groups. We’d run these workshops and really be able to go into depth and detail about the issue and tackle the issue through drama workshops. This way, using a variety of drama techniques from different practitioners (most notably Augusta Boal), we get people inspired about the issue and engage on the issue in a safe environment – drama does that. This is getting people engaged in something quite political in a very safe environment. So, we thought the workshops were a great way of doing that. From there we’ve started to run a series of street performances which is a great way of using theatre because it’s engaging. It’s using theatre in a way that it isn’t accusative and it’s accessible to all. Something like a performance on a stage it would do almost the same thing as the workshops because it would be people saying ‘Yes, I’m going to this workshop’ or ‘I’m going to this performance’. We wanted to do something different we wanted to take drama and this issue to people that wouldn’t have an opportunity to see it elsewhere. We’ve already seen an example of this with our most recent street performance, we were performing and this stag do came by. I got into a conversation with them and I got the sense that these guys had probably never seen theatre before but because we’d taken it to them – to where they were in the streets – it was so accessible to them. A number of them stayed for about half an hour to watch it and really engaged on the issue. I think that really shows how powerful drama can be in engaging people from all different backgrounds on this issue that affects every single one of us in our community.

What are your hopes for the future of Tzedakah theatre?

KP: Our hope is to continue with Tzedakah theatre, we don’t believe we are finished with this project particularly with focusing on this issue because there’s always more people that need to know about it. We’d love to take it to different cities because it is an issue across the UK not just in this area. We’re open to the idea of looking at other social injustices. So, taking ‘our method’ and taking thorny issues from society and approaching them through drama workshops and street performance. We’d love to get involved doing more film work – short films to raise awareness on a larger scale through social media and Youtube. Currently we are in the process of looking for funding for the next year of workshops and performances.

ME: We don’t know what exactly the future holds for Tzedakah theatre. I think what is at the heart of whatever the future holds is this issue. For us it’s not just about creating theatre or creating things that are aesthetically pleasing and I don’t think it ever will be. For us it’s the issue – as long as we are tackling this issue we will be proud of what Tzedakah is doing.