Scotch and Soda is an exiting mixology between two creative groups of artists and friends. Skilfully presented for London Wonderground, Company 2 and The Crusty Suitcase Band in collaboration with Underbelly Productions, exclusively present a production that is breathtaking, visually dynamic and thoroughly uplifting. 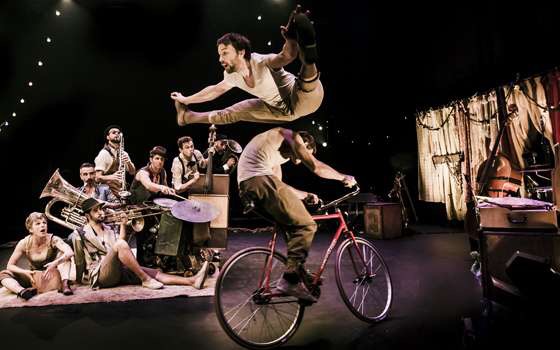 This production denotes an essence of the undoable, alluding to a company of unbelievably talented acrobats, a dynamic soundtrack and an aesthetic that is both magical and ever-changing.This production is an ensemble of circus artists under the direction of Chelsea McGuffin and David Carberry, which explores an ideology of authentic entertainment and amusement. Chelsea McGuffin, otherwise identified as one of the acrobats is thoroughly engaging, far reaching every audience members expectations demonstrating both a sense of characterisation and astonishing talents. David Carberry, also an acrobat of Company 2, impresses with his handsome charm, undeniable strength and mesmerising ability to engage.

This production is entirely immersive with each audience member engaging with the aesthetic of the circus, situated in a beautifully presented circus tent, dancing under the dimmed glow of strung up fairy lights and traditional music. Within this production it is important to note that not only are the acrobats splendid but The Crusty Suitcase Band are unbelievably inventive, innovative and charismatic. This production is a show of many levels, employing varied dramatic devices to create a sense of originality with a creative enhancement towards the action and direction.

Scotch and Soda is a show about creation, interaction and perfection, the atmosphere is jovial throughout, encouraging audience interaction applauding and cheering right the way through. There are many moments of awe-striking acts, but also the occasional moment of magic where silence could not be more effective. Within the production there is a connotation of a multitude of themes which include love, success, passion and competition. These are all explored within 70 minutes of action; all minutes demonstrated perfectly with quick transitions that are creative and precise. Whilst watching the production it is evident there is a definite sense of ownership played out by the Company, with a wilful sense of pride, and competiveness to amuse and engage.

It is a production of colour, awe striking imagery and universality for all ages, even though there is a highlighting of naughtiness. All of the detailing is sublime enhancing an audience’s enjoyment, whilst presenting varied circus skills and stunts, with the accompaniment of a radiant soundtrack. The only negative about this production is not knowing when to stop applauding. I leave the production inspired, awe-struck and presenting a real urge to run away with the circus. 5/5

Scotch and Soda is currently showing at London Wonderground until Sunday 2nd August. For more information on the production, visit here…