Imagine, if you will, the myth of Faust, seen through the lens of a Golden-age Hollywood musical comedy, wrapped up in homage to contemporary dance legend Pina Bausch. French theatre maker Philipe Decoulfé and Compagnie DCA collaborate to present Contact, a witty, beautiful and surrealist ode to both cabaret and musicals. 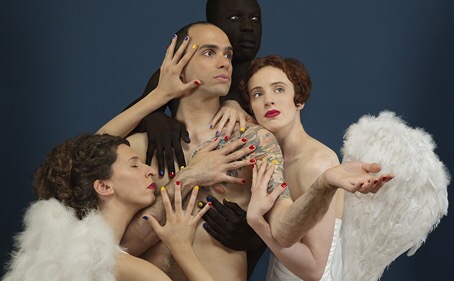 This show is both a presentation of talent, spectacle and imagination, only showing for a limited season at the infamous Sadler’s Wells Theatre. This production with its complex story, absurd dialogue and often flailing comedy denotes an essence of the fantastical, with a cast of dancers, singers, acrobats and questionable comedians. It is a production of visual spectacle however, it does present the much debated question ‘does theatre have to be understood or just acknowledged? ‘ Philipe Decoulfé, in this contemporary re-imagination of the classic story Faust, aims to achieve a construct of ‘pure entertainment’ otherwise referred to as a ‘dash of magic’ and a sprinkling of spectacle.

The performance begins with an absurd attempt of breaking the fourth wall, but failing with an essence of misogyny and gender play. From beginning to end however, this production is anything but boring, it engages, immerses and often takes your breath away. The production is structured into several vignettes presenting diverse dance, circus and musical delights. This production is a true mix of experimental theatre, featuring pure moments of beauty that are mesmerising and awe inspiring, often juxtaposed with dialogue that connotes an element of inaccessibility working towards an ideology of alienation.  The production as a whole is an amalgamation of vignettes that individually inspire thought, creativity and debate. Within the performance there is a prevalence of french comedy which can also be questioned as culturally appropriate, often referring to stereotypes and placement of gender roles. However, this production is magnificently aesthetic and is a show of fashion alluding to outrageous but fabulous costumes, wigs and set design.

Within the production there are several dance routines that are incredible to watch, both visually and emotionally dynamic. A dramatic device employed by Compagnie DCA, is the use of live video footage, which is used as an enhancement towards the action, entrancing the audience into a modern world of streaming whilst enlightening the mind’s eye. As Contact is a show about imagination, interaction and creativity, the atmosphere at first is fun and engaging; however this later develops into a sense of alienation, confusion but prevalent intrigue. Within the production there is a connotation of a multitude of themes which include love, freedom, sex, and sin. These are all explored within a mixology of methods denoting a variety of theatre practitioners and diverse methodologies. Whilst watching the production it is evident there is a definite sense of ownership played out by the cast, connoting a real sense of passion, however the emotions are inherently interpretive, which could appear as a barrier for various members of the audience.

With just simply one stage, several props and many wacky costumes, this production is self defined, unique and surrealist to a point of unimaginable absurdity. It is a production of colour, awe striking imagery and intellectual technological enhancements. It began with me questioning what I was about to watch, but ended with me leaving inspired, still slightly confused but intrigued by the material presented. The detailing is intricate and well thought out enhancing an audience’s enjoyment, with a surrealist edge but a temperament of confusion, alienation and aesthetic absorption. I leave the production perplexed, with many unanswered questions that remain to be debated and explored. 3/5

Contact is currently showing at Sadler’s Wells until Thursday 18th June. For more information on the production, visit…

« Previous post
WIN TICKETS TO SEE PAINES PLOUGH’S ‘LUNGS’ AT THE SOUTHBANK CENTRE!
Next post »
WIN A PAIR OF TICKETS TO CIRCA'S CLOSE UP WHICH WILL BE SHOWING AT THIS YEAR'S EDINBURGH FRINGE FESTIVAL!