It’s important for me to realise that I have, as a matter of fact, been terribly spoiled by the high standards of British Theatre and that it’s easy for me to subconsciously fall into the trap of measuring all the things I see with the same ruler. Even though I tried to constantly remind myself of this whilst watching, this 4.48 Psychosis performance just didn’t cut it, from any point of view. 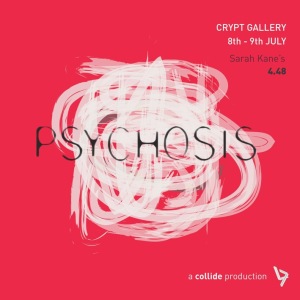 This show just seems to have taken the most obvious interpretation of Sarah Kane’s last work and turns the labyrinth-like space into the representation of a depressed brain, which sounds much better than it looks. The Crypt Gallery has an amazing immersive potential, but it is definitely not used in a creative or effective manner: The constant pool of obnoxious neon light drowns the inherent hollow nature of the place; The spaces the promenade take us through distinguish themselves from each other only through boring and obvious scenic elements and finally, I realise that the same narrative dynamic is repeated throughout the whole space and play.

Presumably I am the only one that realises that there is some sort of attempt at sound design, since the surprising monotony of it quickly dulls your hearing and renders it completely ineffective and essentially inexistent. I must say that for some reason I appreciate the artistic attempts made with percussive screeches and such instrumental effects performed live at one point, but it still doesn’t make any impression on me.

The girls playing the tormented mind of the female character whose mind we are meant to physically be in are committed but obviously inexperienced, evidenced by the giggle I see from one of them as she misses her line, for example, or the inharmonic group presence. There is a clear attempt at a Greek chorus-like interaction between them, but it proves to be disengaging as much for them as for me.

I understand that the substantial amount of swearing is part of the script, but the constant, exaggerated way in which it is done just turns the intended effect into an annoying, predictable gimmick. Swearing is a powerful dramatic tool that should be used carefully, or it can, as proved by this performance, become corrosive to the atmosphere and to the audiences’ interpretation of the action.

Yes, as I said, my concept of aesthetics in theatre has evolved radically since I arrived in London, but I cannot give credit to a play whose creative experimentation rubs off more on my nerves than on my mind.

4.48 Psychosis was on at the Crypt Gallery from Wednesday 8th until Thursday 9th July. For more information on future productions at the Crypt, visit here…

« Previous post
Bryony Kimmings Speaks to Theatrefullstop About her latest production, Fake It ‘Til You Make It!
Next post »
King Henry V @ The Union Theatre