How to review a play that dictates reality so thoroughly on its own terms? Marsha: A girl Who Does Bad Things invites us into a claustrophobic world where logic does not obtain and reason has no purchase. In so doing, the operetta offers a palpable experience of mental disturbance and some rather oblique insights into the topic…It also offers, a headache to any reviewer trying to describe the experience! 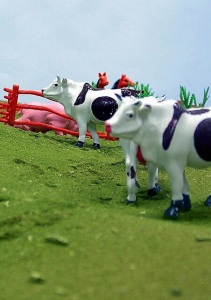 The story depicts a day in the life of Marsha, a merrily solipsistic child, charmed by her own beauty and talents and keen to show them off. We accompany her as she attends to her daily tasks, buying sweets from the shop, chatting with a belligerent farmer, idling in a local pond. We are in the benign bubble of a child’s fantasy world, and as the story continues, these fantasy elements become increasingly pronounced. Before long, the audience is plunged headlong into very surreal territory, confronted with an awkward love triangle between a farmer, a little girl and a unicorn, and possibly cannibalistic shopkeepers.

Real and unreal become perilously slippery categories. A pervasive sense of threat follows us on our journey, yet the origin of this threat is something we’re left to puzzle over; whether they are totally Marsha’s invention, or whether there is a sinister reality, encroaching on the girl’s benign bubble of make-believe.

Candice Weaver
has done a brilliant job with the set design, which inventively captures the isolation of being unwell. The studio is covered in Marsha’s childish self-portraits. The audience members are also given Marsha masks, scrawled in crayon and we are encouraged to wear these during the show’s duration (it’s like being in a venetian ball under the creative direction of a five year old). On a very concrete level, the clinging masks create an atmosphere of suffocation as we are guided through an increasingly unnerving tale. On a more symbolic plane, the visual ubiquity of Marsha’s face, plastered across the walls and the guests themselves, gives us an insight into her cloistered imagination; as she attempts to broker contact with an external world, she is met only with projections of herself; her landscape is a wall of mirrors.
The cast perform impeccably. Tilly Gaunt, as Marsha, exudes childish energy, and offers a subtle interpretation of mania. A speech about a blissful encounter with predatory fish will chill you and show a character tight-roping between terror and ecstasy. Jessica Gillingwater is also worth special mention, if only for her brilliant comedic contribution as she sings tragically about her experience with omelettes.

Martin Constantine’s masterful direction is consistently interesting and he should be commended for bringing the world of David Lynch to opera. Through slight exaggerations in tone, he renders the banal uncanny, making a broader statement: the difference between normality and the grotesque rests on a knife’s edge.

This is an opera in the most loosely post-modern sense possible; an opera a la Jerry Springer. It is macabre, frequently hard to follow and I am confident it will feature in my nightmares at some stage. Another win for the Grimeborn Festival!  4/5

Marsha: A Girl Who Does Bad Things was shown at the Arcola Theatre as part of this year’s Grimeborn Festival from Tuesday 11th to Saturday 15th August. For more information on this year’s festival, visit here…