Creatively presented for Underbelly Edinburgh, Lost Sock Company engages with its new writing, current interpretation of the sporting industry whilst analysing the concept of fulfilling your individual hopes and dreams. This production of Tether written by Isley Lynn is both realistic, creative and visually engaging. 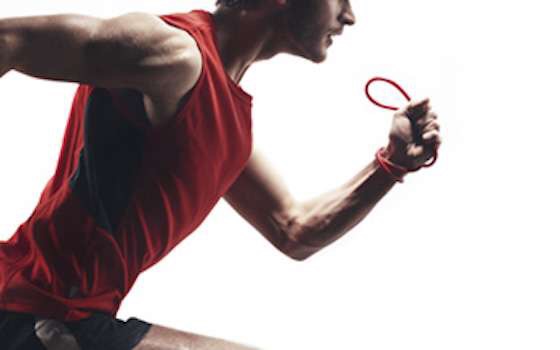 Tether explores the powerful story of one individual who one day hopes to run for Great Britain, but when Mark doesn’t qualify for the London 2012 Olympic Games, we are left questioning what is next for this ambitious character. The story explores how Mark becomes a guide for runner Becky, who is blind but appears also determined for success and fulfilment of dreams.

This production is a striking exploration of power, determination, ambition and friendship. It discovers an enduring relationship, one in which reflects infinite loyalty and support. This production is not only detailed in story but is also visually dynamic. We begin by entering the space, a character dressed as if about to sprint, stretching, we watch from the seats of the auditorium, the lights come up and we are entertained by an initial movement sequence. This movement sequence is often repeated throughout the production, offering a base for the action. This sequence denotes a rhythm, flashing lights and for one or both actors to be attached to bungee cord. The movement sequence is highly effective in presenting realistic motion within the piece as the actors can feel the strain of running.

Lee Drage
, plays the lead role of Mark who within this production is engaging, naturalistic and provides the energy for the piece. Maisie Greenwood, otherwise titled Becky is the blind woman who Mark aids to victory and success. Both the characterisation and writing of these characters above is realistic and authentic. The roles appear relevant and relatable with a real sense of enlightenment towards an industry that is not often analysed from this angle.

As a production it explores the sporting industry often denoting repetition, highlighting the repetition of training, and the entirety of a runner’s life. However, I often find this repetition disengaging, I believe that although the noted movement sequence is effective I often think how else the movement could be presented. Exploring various elements of direction, space and immersive quality, I believe would make the production more visually dynamic and pleasing.

Although the production is repetitive it does offer a sense of consistency, and development of story. A dramatic device employed by Lost Sock Company is the use of sound effects which are used as an enhancement towards the action, entrancing the audience into different levels of engagement, setting and emotion.
As Tether is a show about ambition, success and destruction, the atmosphere at first is tense and anxious, however this later develops into a sense of laughter, friendship and reliance. Within the production there is  an emphasis towards the multitude of equilibriums both destroyed and rebuilt, this creates an arc for action, plot and story development. Whilst watching the production it is evident that the piece is still at its early stage, longing for more physical direction, enlightening transitions and overall more creativity. However with just an hour of play this production is unique, fresh and detailed. The action and detailing is structured, effective and cooperative, with a story of determination, this piece allows for an intriguing light to be shone on the sporting industry especially from the angle of disability. I leave feeling ever more so determined to live out my hopes and dreams, with an evoked sense of determination, spirit and passion. 3/5

Tether is currently showing at the Underbelly Edinburgh Fringe Festival until Sunday 30th August. For more information on the production, visit here…