Having become the “poster girl for mental health” through sheer happenstance, Ruby Wax‘s expertise in understandIng mental health and cognitive therapy might not be universally known on her list of credits. Those expecting a stand up show will be somewhat surprised to find themselves at a show centred around far more serious points than the elements on the surface of Wax’s chaotic life such as buying too many throw pillows. 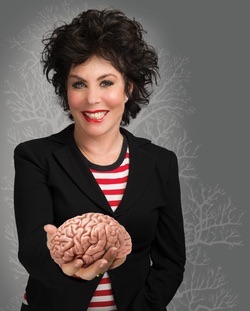 Wax has structured her show well, bringing the audience through a series of questions which lead into her explanation of how the brain works and just why we all feel the same niggling thoughts every day. It’s a nice comprehensive approach, though Wax does come across as a little patronising when she tells the audience on several occasions that they don’t get it. However, Wax does also do a lot in her power to ensure we do get it- there are readings, diagrams, and even a crude cartoon of a caveman to explain our amygdala.

In addition to Wax’s visual aids on the screen, the stage is set up for a more lively show than the TED talk the content could easily suit. Wax doesn’t dart about the stage, but rather wanders. The staging seems to follow an erratic thought process Wax points out as her own, with mugs of tea, a sofa and a pilates ball promising any number of scenarios. In having so many on-stage distractions, the show does run on tangents a few times. Luckily, Wax pulls herself up off the arrangement of cushions (which, we’re told, are comfier than we can imagine) long enough to deliver a clear and concise argument.
The show’s been carefully workshopped across the course of the last two years, and it shows. Its thoroughly practised nature works well for the scientific crash course but means the jokes are at risk of sounding scripted or tired at this stage in the run. The performance comes across as a labour of love on Wax’s part, and perhaps serves as an accompaniment (or extension) of her book which if true might not be as all-inclusive as a stand-alone show should be.

The second half of the show showcases Wax’s natural quick wit and brash sense of humour. Her passing digs might not appeal to all members of the audience, but she hosts a post-show Q&A session carefully, handling queries on mental health with all the attention they deserve. The show suffers from having several points where it might end naturally, yet doesn’t. The energy of the show needs some fine tuning I feel, instead ranging from serene one minute and all-dancing the next. However, there are still some moments of reflection which make the audience feel truly united. The matter-of-fact admittance that we all feel the same insecurities is nicely reassuring, and here is where the show does feel as universal as Wax has intended. 3/5

Ruby Wax: Sane New World was shown at the Grand Opera House York on Monday 14th September. The production is currently on tour, and will be showing next at the Birmingham Rep Theatre on Sunday 25th October. For tour dates, visit here…

« Previous post
Artist and Perfomer Selina Thompson speaks to Theatrefullstop about her latest work, Dark and Lovely soon to show at the Ovalhouse Theatre!
Next post »
hamlet is dead. no gravity @ The Arcola Theatre (VOLTA International Festival) Review