It’s not often we celebrate the idiosyncrasies of dogs; the only time the much loved pets have their moment in the spotlight is either for a Dog’s Trust Campaign or during the pomp and pageantry of C.R.U.F.T.S. Described as a ‘man’s best friend’, there’s no doubt that dogs hold a very important affinity to the family household, often considered as an additional family member. Watching a production about dogs may not necessarily sound as appealing a subject matter at first glance, however can Kandinsky‘s Dog Show challenge this perception? 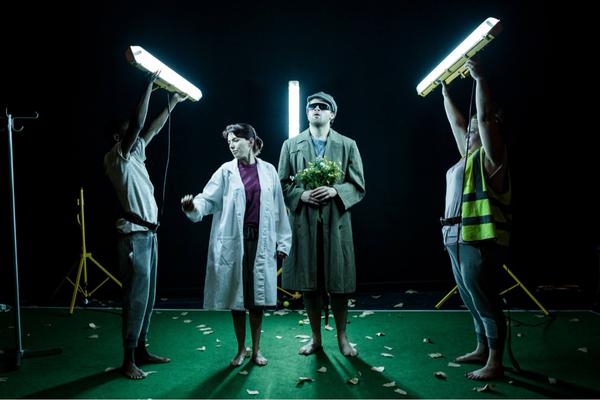 On paper, Dog Show has the potential to leap off the theatre programme, the production is part murder mystery and part day to day drama as residents of a local leafy suburb suffer the consequences of a dog serial killer. The thought of a serene, typically undisturbed part of London being threatened by the ill intentions of a mysterious being embeds a sinister edge to an otherwise conventional drama.

Kandinsky’s production mostly leaps and scurries with zest and charisma; Haz Webb channels Jennifer Saunders and Dawn Franch’s wit and comical prowess as a self assured, no nonsense, dog trainer, navigating the audience through her tried and tested training regime. The point of view cleverly shifts from a human’s, to a guide dog’s as Webb transforms from an astute, well poised, middle class trainer, to a considerate dog driven by basic instincts. This convention of switching from the human’s perspective, to the dog’s point of view give’s Dog Show its unique selling point.

It’s rare for a theatre production to tap into the mind set of an animal, and this show attempts to do this, without presenting the typical physicality attributed to dogs by walking around on all fours. The ensemble’s physicality is endearing, as they switch from humanistic conversations to scuttling, spinning in circles, playing dead, running for twigs etc. I am left however wanting to gain more of an insight into the thoughts of all of the dogs presented, as only the guide dog is given that opportunity to take to the microphone.
The ensemble work is a joy to watch from a comical perspective. Lisa Kerr amuses as a graceful, poised and well trained Cavalier King Charles Spaniel, multi-rolling also as an overly attentive dog baby sitter, dressing up her owner’s dog in the latest designer gear. Ntonga Mwanza delights as an overly energetic Pug, running through the audience as his owner calls on. A fun way to break the fourth wall, drawing the audience ever closer into the park environment.

Hamish Macdougall is the key to bringing the audience to tears, however this is not the case. Depicting an elderly man, who is mainly helped around by a guide dog, he battles to keep any sense of normality in a lonely household. A stubborn, un politically correct character adamant in his views,  his characterisation could go further, I am left wanting to learn about his wife.

Al Smith writes a busy script. Dog Show intertwines a thriller, with every day life, however the sinister under current does not leave me feeling fearful, when surely that should be the intention. The audience are introduced to numerous comical characters, however it’s difficult to display well rounded human beings. James Yeatman directs a fun and cheerful production, interjecting gloomy and sustained phrases accompanied alongside Zac Gvi‘s atmospheric musical accompaniment to highlight the serial killer’s presence. Dog Show is unique, a playful production looking at loneliness and relationships, but could explore this further. 3/5

Dog Show is currently showing at the New Diorama Theatre until Saturday 17th October. For more information on the production, visit here…