As a production, Apart wears its heart on its sleeve. Created by the celebrated theatre group, Colectivo Alebrije, the play explores the historic leather-making district of Mexico’s León city. Intercutting between tales of past and present, the collective craft an intimate biopic of the region, traversing a range of perspectives to create a collective vision of the area. It’s difficult to avoid being charmed by the three performers, who attack the material with gusto and clearly telegraph their passion for the subject. However, the overall ambition of the production frequently outstrips their capacity, giving the material a rushed, unplanned quality. 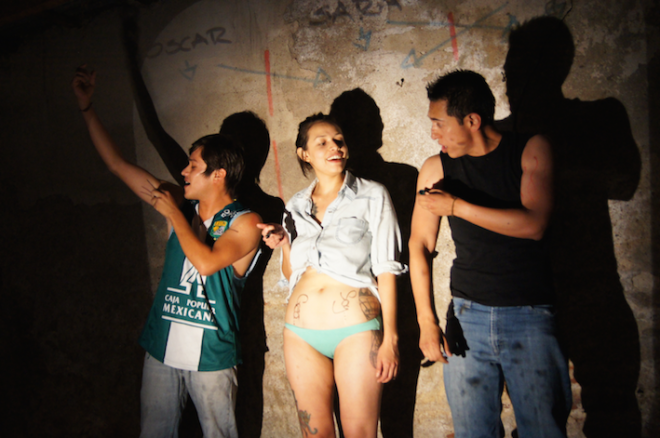 Stylistically, the group set their sites high; it’s rare to see a show tackle quite so many disparate art forms. In the short production, the audience is treated to documentary footage, expressionist dance, monologues, songs, slide-shows, group discussions, synchronised choreography with even a food fight thrown in for good measure. In some ways, this fragmented approach suits the subject; rather than a linear narrative, we are given a mosaic of a region, encompassing a range of impressions from very different subjects. Yet while some of the chaos of León is effectively conjured, the collective itself struggles to keep up with their material and awkwardly transition between modes and tones. Though there is an infectious energy in the room, some of the scenes start to feel stunted and slipshod.

Apart really hits its stride when the staging is at its simplest. Candid retellings of real-life experiences offer the play moments of striking resonance. The image of skin is frequently returned to as a central metaphor. The collective explore the notion of skin as a porous boundary, where the subjective, internal reality meets the objective external world. The metaphor carries through and offers some structure to the play, as the speakers explore the fraught negotiations between private and public experience and the tensions that ensue.

One gets the impression that some really great material is being lost in the show’s overall cacophony. That said, Apart is well worth a watch, brimming with ideas and indeed hope, there’s a lot to take away. 3/5

Apart was shown at Rich Mix as part of this year’s CASA Festival on Saturday 3rd October. For more information on the festival, visit here…