Quirky, witty and totally bizarre, Rachel Chavkin’s Roosevelvis is one of many contemporary productions hitting the Royal Court‘s books this year. An interesting team up in the form of Teddy Roosevelt and Elvis Presley, who both manage to acquire a great many laughs from the live audience. Exploring the realms of music, history and most importantly their own personal achievements. With this you begin to get a real sense of what these two well-known American figures may have been like. With a comedic twist of course. 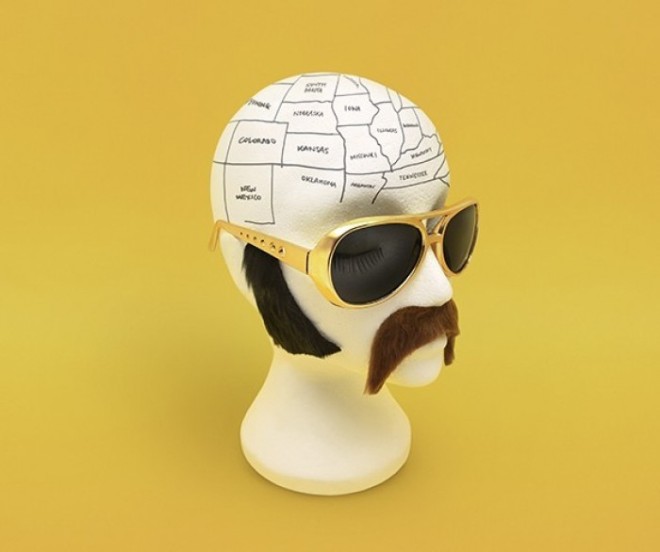 However, although most of the attention is drawn to the energetic duo, the major point of focus within the piece is centred on a young girl named Ann. A lesbian, who is self-conscious over how society might perceive her, whilst professionally working at a meat processing plant. Depressed, confused and a little pale looking this character provides a little seriousness within a widely humorous piece. It may even seem odd at first, as the actress playing Ann also plays Elvis Presley, so do bear that in mind if going to see the play.

The production contains stylised dancing, grand costumes and a set displaying that of half a living room and half a TV studio. As the characters travel about in cars, such as Ann wishing to make her way to Graceland, the incorporation of the green screen and lighting make you feel like you are actually in a Hollywood film set. As well as the speedy technicians who race across the space with little to no care for the action or scenes taking place, added another comic taster to the play.

High speed car chases, lovable characters and a whole host of confusion. Roosevelvis will leave you literally questioning life as you know it!

Roosevelvis is currently showing at the Royal Court Theatee until Saturday 14th November. For more information on the production, visit here…