I’d like to start with saying that for me, Circa are one of, if not the most exciting companies premiering their work at this years London International Mime Festival. This particular piece is developed from Moneteverdi’s Il Ritorno D’Ulisse, consequently becoming part circus show part opera – which is a surprisingly eloquent mix. 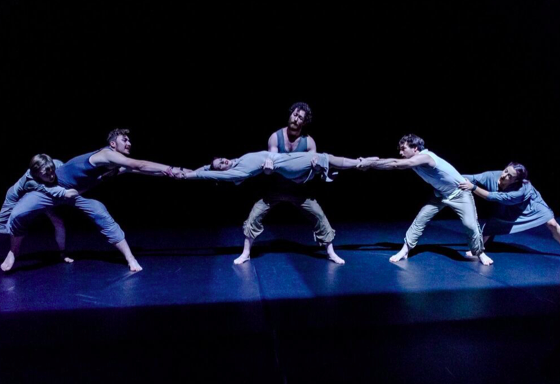 Director Yaron Lifschitz has almost created two worlds on stage. One of music, life and colour. The other of the harsh reality one might find when stranded – desperate to find your way home. Lifschitz bridges a wonderful connection between the large variety of performers. The acrobats perform whilst the singers watch them. The musicians look out to the audience – watching us, watching them. The fear of voyeurism is something one might find when in this situation in real life – it is exemplified here. There is a real beauty within the separation of these “worlds.” I must admit that the performers (in particular Bryony) are so mesmerising that initially I don’t realise that the orchestra are playing live. In the post show discussion, Lifschitz reminds us that for him, classical music is a living form. This is portrayed beautifully throughout. Additionally to the live Moneteverdi, we also hear isolated bars of the same music adapted into a pre- recorded electronic soundtrack. Another great thing about this piece being sans speech is the sound of the performers skin upon hitting both the floor and each others bodies. It is almost as though the performers are unknowingly contorting themselves into the music notes of their own songs.

All artists involved in this particular rendition of Il Ritorno/The Return are incredibly skilled. Each adding a new element of play to the piece. Both body contortion and acro-balance feature frequently, those two things alone make the piece worth seeing. They have a marvellous way of demonstrating emotional control or possibly the loss of it, showing how the body might respond to loss and separation through its own physical language. There’s always something very interesting about watching the physical strain of a performer, the ‘will they, wont they’ moment. An Impeccable sense of commitment is shown throughout the entirety of this piece. Although it isn’t particularly linear, somewhat of a clear narrative is evident within each artists individual physical language. They successfully turn spectacle into a story.

An element of beauty which I find within this production is the exhibition of female acrobats in a marvellous trio of aerial (cube and straps) and hand balance acts. A particularly impressive moment is found when we see one artist manoeuvre her own body on aerial straps in such a way that she looks as though each of her bones are breaking and reforming. It is a moment of not being able to look, but not wanting to look away either. An incredibly powerful physical exploration of the internal feeling of loss, or even to a greater extent, death. Another image which has stuck with me involves all 6 artists. The 3 male members of the cast kick off the sequence by forming what I can only assume are human stepping stones upstage. The remaining female performers then use the physical bodies of their counterparts to hang themselves form the ‘wall.’ The male performers then remove themselves, leaving them hanging, alone – in the abyss. It is incredibly interesting to see what feeling is evoked from removing half of the tableau.

What’s great about Circa as a company and this cast in particular is how real their performances are. There is no acting, no dancing, no time to pretend. The entrances and exits of artists make it evident that these are real people experiencing true emotions on stage. In turn, making the way they perform acrobatics even more remarkable. Circa’s reality also lies within its relevance, which seeps from this production.

The last sequence I’d like to comment on is a trio of duo’s, moving towards the light, or rather hope. One of the acrobats, Duncan I believe, comments on this in the post show discussion. He highlights the nature of play within their working relationships. He says “anything can happen on stage, and often it does.” He also explains that he and his duo partner, Bryony, improvise a lot of their interactions together on stage. Circa’s acts are both dangerous and exciting in equal measure – all the more reason to go and watch them! And if you have seen this piece, go again. It is every changing.

To wrap up, I want to commend the company on what a marvellous job their doing for the arts. Circa are entirely self funded, and have 31 artists employed with them – full time. Any performer can appreciate the rarity of this. They are also currently touring 10 shows worldwide! You’d be a fool to miss them. 5/5

The Return is currently showing at the Barbican Pit as part of this year’s London International Mime Festival until Sunday 31st January. For more information on the production, visit here…