In the Night Time @ The Gate Review

Nina Segal’s experimental new work, In the Night Time (Before the Sun Rises), explores the trials of two new parents unable to stem their newborn’s tears. Taking place over a single night, the couple grow increasingly desperate as the baby’s shrieks ring out. Sleep deprived and frantic, they’re soon contemplating the very morality of bringing new life into this world, and begin entertaining apocalyptic fantasies. 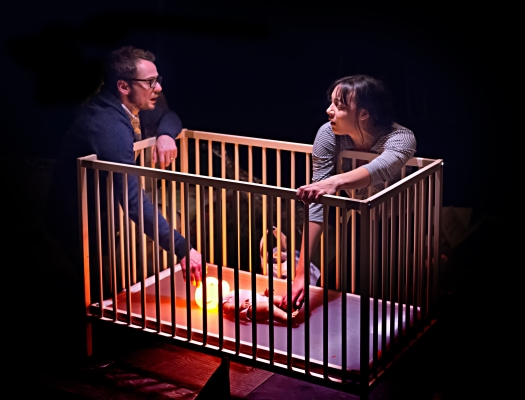 The play begins in the manner of an imagist poem evoking lonely, disconnected fragments of an evening somewhere in the UK. The two recount their first meeting, and their growth as a couple, sweeping the audience away in the excitement of early romance. The birth of their first child triggers an abrupt change of tone, however, and we’re soon guided along a hallucinatory voyage into the abyss.

There is a fluidity to the writing that builds an almost mystical atmosphere. The play moves seamlessly between first and third person, the personal and the political. As the man and woman bicker, private grievances bleed seamlessly into global anxieties. We’re given the experience of a mercurial world where little remains fixed. Creative staging reinforces this impression. Upon the play’s opening, all props and set are tightly wrapped in plastic, evoking lives that have been compartmentalised and rigidly compressed. This gives way to a general unfurling, as junk and detritus fan out over the stage and order detritus.

Despite the surreal nature of the work, one gets the sense it is probing some very real social issues. On the broadest level, the play inquires how atomised moments and personal decisions are connected to a broader picture. The play’s repeated refrain “These two things are not connected but — (they are)” invites the audience to reflect on this problem of interconnectivity, how our choices can be both discreet and public at once.

Both Alex Waldmann and Adelle Leonce excel, keeping pace with the script and deftly switching between comic and tragic modes, rage and rapture. There’s a natural chemistry between them, making the play’s early moments almost hypnotic.

Harrowing and intellectually demanding, In the Night Time requires a lot of work. However, for those willing to invest, it is a deeply rewarding experience. 3.5 /5

In the Night Time is currently showing at the Gate until Saturday 27th February 2016. For more information on the production, visit here…