The Shadow King @ The Barbican Review

This Malthouse Theatre production transports Shakespeare‘s tragedy King Lear to an Aboriginal community in the Northern Territories of Australia. Lear, played by the energetic Tom E. Lewis, who also co-wrote the story together with director Michael Kantor and the cast, is the leader of an indigenous community who decides to divide up his land between his three daughters – land that he has no right to give as Cordelia advises him in the opening scene: “You can’t give what you don’t own.” Written in a mixture of English, Kriol and other indigenous languages, the text is still easy to follow. “A tragedy this milli, our tragedy” explains the Fool (a charismatic Kamahi Djordan King) at the beginning of the performance. 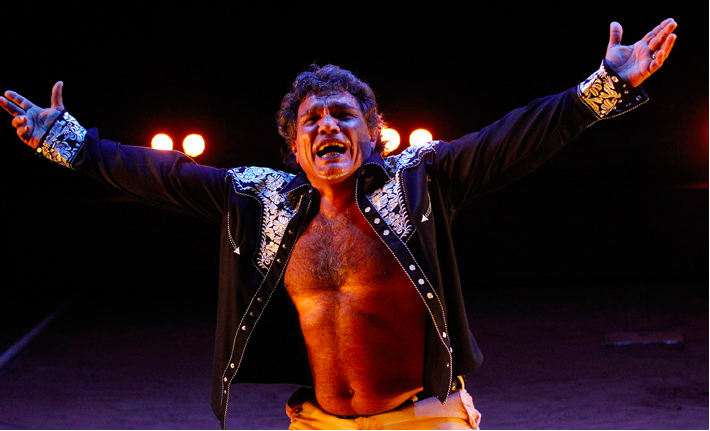 A live onstage band accompanies the action whilst Shakespeare’s text is retained, yet transformed. The original Shakespearean verse appears at certain intense moments and it jars somewhat with the adapted and modernised text.

The audience is transported to northern Australia through widescreen video projections of the different locations, from the suburbs to untamed landscapes and the open skies, and the dynamic stage design. The stage is covered with red earth, into which the centrepiece of the set, a mining truck with blinding headlights, is jammed, serving as a barrier between Lear and his daughters Regan and Goneril once he has given up his land.

Focusing on the intense relationship of the indigenous community to the land, the production has Lear go on a walkabout as his madness reaches its climax and he is dancing in the vast land accompanied by the uncanny sounds of a didgeridoo – and it is the land that ultimately heals the deeply wounded Lear.

The cast consist of experienced Aboriginal and Torres Strait Islander performers who bring humour and warmth to the play. Tom E. Lewis is a confident and energetic Lear who is a far cry from the doddery old man one gets to see at times. Frances Djulibing is touching as a female Gloucester, mother to both Edmund and Edgar who have different fathers in this production. Jim Bani’s Edmund effortlessly switches between a cuddly teddy bear act and his true self – a ruthless manipulator and megalomaniac. I was especially impressed by Kamahi Djordon King as the Fool, whose observations make him wise beyond his years and who adds humour and wit to his scenes with Lear.

Although the show is somewhat uneven, there is much to enjoy and even more to think about. 4/5

The Shadow King is currently showing at the Barbican until  Saturday 2nd July 2016. For more information on the production, visit here…