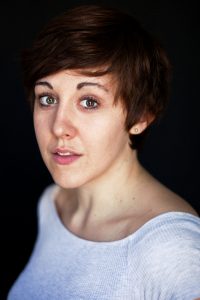 Recovering from the breakdown of a relationship isn’t easy, and we usually deal with the effects of heartbreak behind closed doors. For some, an added layer of humiliation sadly taints the process of moving on by having their intimate moments plastered on various revenge porn sites. The fast paced nature of social media and online forums make it impossible to escape from, and this is becoming a sad reality. Award winning writer and performer Charlotte Josephine draws on this topic to create the very timely BLUSH, which will take residency at the Underbelly, Cowgate next month in Edinburgh. Ahead of the festival, Theatrefullstop speaks to Charlotte about performing at this year’s festival, her inspirations for creating BLUSH and the process to creating the piece.Hi Charlotte, you’ll be shortly be heading to the Edinburgh Festival to perform your new piece, BLUSH. How are you feeling ahead of the festival?

A provocation set by Sphinx Theatre to write a female protagonist for their Woman Centre Stage Festival at the National Theatre started it. But it had been brewing for a while before that, I’d been researching shame, reading about the brain, and how we react physiologically when we feel like we’re threatened. BLUSH feels like it follows on from Dan’s play WEALD, which we put on at the Finborough Theatre earlier this year. They’re both scratching around the same questions, picking at our perceived gender roles, and the shame we feel at not measuring up to those unwritten rules of how to be a woman/man.

How did you approach creating BLUSH? Was it the same process as your previous projects?

I wrote the first draft quite quickly, vomit on the page type thing, which seems to be the birthing-style of most of my work. I drank lots of tea, that’s pretty standard. I asked for help much sooner this time round, I think there’s a dangerous myth that you should lock yourself away and come out with a masterpiece, we’re meant to collaborate. So Snuff Box did an early R&D with some lovely actors we know, and I was fortunate enough to get some funding so I could quit my café job and dedicate some time to it. I asked some lovely people I trust to read drafts. I drank more tea. Research this time involved a lot more reading than boxing, though some steam was let out in the gym. This is only my third play, I’m still learning.

BLUSH is a very timely piece focusing on an aspect of our culture that seems to be a bi-product of our social media era. Does BLUSH have a message for its audience? If so, what?

I don’t feel comfortable telling an audience in advance what I think they should get from the piece. That’s a bit boring isn’t it? I guess the main thing I’ve learnt in my research is from Dr Brene Brown, who says that the antidote to shame is empathy.

You’re a playwright who is very responsive to the times, having created the multi award winning and critically acclaimed Bitch Boxer in the Olympic year that witnessed Nicola Adams win gold for GB in the 1st ever women’s boxing flyweight weight championships. As a playwright, what do you have a mission statement?

No I don’t have a mission statement. I’m not deliberately trying to write material that’s zeitgeisty. I try to write as honestly as possible. Sarah Dickenson, BLUSH’s dramaturg, taught me to “write from the belly” and I try my best to do that.

He’s alright. He’s my mate so I laughed reading that question. He’s a fucking brilliant actor. I wrote it with him in mind, because he’s right for it, he gets it, I trust him totally.

Edward Stambollouian directs both yourself and Daniel in BLUSH. Do you go into rehearsals with a clear vision as to how you see the piece and communicate that to Edward?

No it was much more collaborative than that. It would be a huge insult, and a massive waste of time, for me to dictate to Ed how I wanted him to direct the play. I’m a scruffy writer, full of heart, but lacking structure and focus and finesse. Bryony Shanahan is the unsung hero of Bitch Boxer, which is probably right in a way because we only mention a director when we spot bad choices. Ed’s work on BLUSH has been staggering, he’s constantly questioned the why’s and teased out the possible how’s. He’s made some words I wrote something watchable, something living.

What advice would you give to aspiring actors and playwrights?

Be kind. Be honest. Put the kettle on.

BLUSH will preview in Edinburgh from Thursday 4th until Friday 5th August at the Underbelly, Cowgate. The show will officially run from Saturday 6th until Sunday 28th August. For more information on the performance, visit here…