Sitting down at Sadler’s Wells to see Vamos Cuba the expectations keep rising. As I browse through the program I gather there is a storyline and that consequently the show will be so much more than just bouncing and shaking at the sound of Cuban music. The format seems similar to that of a musical, even though the main form of communication will be through dance and the performers will not be the ones singing but rather the singers who join the band. 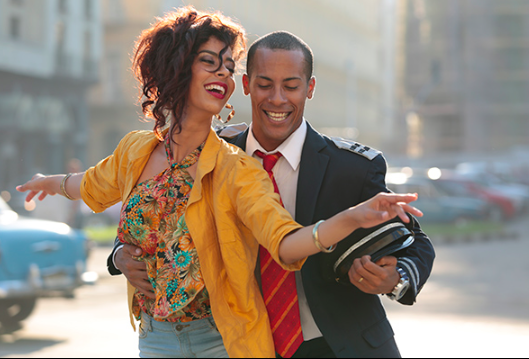 An exciting set and a colourful opening image of the performers on stage nurture my enthusiasm throughout the first few minutes. However, I have hoped for too much as the show as I realize the plot seems more like an excuse to show off the dancers and their skills rather than the other way around. It reminds me of the plot around We Will Rock You; considerably weak, constructed with the sole purpose to indulge in Queen’s music. For that you might as well assume it as a concert and forget the narrative. In this case, I’d rather it had been assumed as isolated dance pieces with not much of an aim rather than to entertain. There is nothing wrong with dancing for pure entertainment. However in the first act several pieces have what I consider quite childish choreography, neither original nor exciting. The second act has many more distinct flavours and variety and some pieces are much more inventively choreographed.

For a show that intends to portray Cuba’s lifestyle, history and culture through dance I must say that portrait is narrowed down to a rather stylised and stereotyped view of its inhabitants. Mostly taking advantage of the dancer’s sensuality and sexuality, most of the routines are all about the clichéd game of sex and power between men and women with the added narrative of an unconvincing love at first sight. The costumes are at times overtly sexual with no apparent need and it distracts from the dance. There are many witty moments, some of them very clever such as the flight announcements and some fleeting acting instants in-between dances. There is also some overacting going on which unfortunately always undermines the strength of the scenes.

Nevertheless this show has undoubtedly beautiful moments of solid choreography delivered brilliantly by the exceedingly talented and strong dancers. But this being a show with such an ambitious premise it fails to keep that standard throughout the two hours of performance making it all in all quite uneven and inarticulate.

The live band and the singers surely add the glamour and the excitement the dance sometimes lacks. The singer Geydi Chapman is particularly outstanding in her passionate and powerful delivery of her solos.

At the end of the show one word springs to my mind. It is fun. Fun. At times I do feel the urge to join the performers and dance on stage myself. But, even though it aims for the clouds it never really takes off the ground. 3/5

Vamos Cuba is currently showing at Sadler’s Wells until Sunday 21st August. For more information on the production, visit here…

« Previous post
Get ready for the Saturday Night Spectacle at this year’s Wilderness Festival!
Next post »
Wilderness 2016!