The Rivals is a restoration comedy of the highest order, involving plenty of mistaken identity, outrageous faux pas, and other comedic misunderstandings on the road to love. A familiar formula to many, but, even to the robust sensibilities of contemporary Bath, a daring one. Perhaps this is because of it’s slightly autobiographical nature (Sheridan presents hysterically exaggerated glimpses of his own life in order to prevent possible detractors from taking them seriously), but, though only his first effort of play writing, this work is still hailed as one of the most incisive, irreverent, and enduring plays in the Sheridan canon. 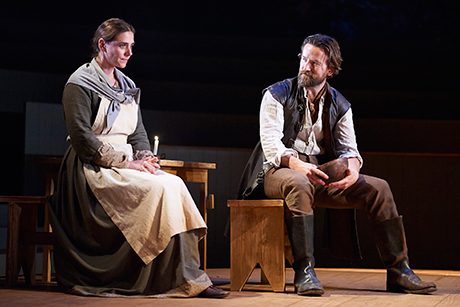 Having seen the play several times before, I can confidently say that this is a particularly stand-out production. Given the wit and elan of the text itself, it can be tempting for companies to simply go through the required motions, assured that the script will get the laughs – not so here. Each performance feels fresh, individual, and remarkably modern – an excellent example is Lucy Briggs-Owen’s Lydia languish, whose Made in Chelsea drawl perfectly evokes the spoiled aristocracy of today’s elite public schools, and brings the character to life for a modern audience in excellent satirical form. It is a testament, I think, to Dominic Hill’s direction, that each character fulfils its purpose so elegantly, each quite unique, and yet rendered quite essential to the alchemy of the production. There are no stereotypes here – while satirical references are brought up to date, each actor also manages to remain true to the characters Sheridan has written, and the usual superficiality of a restoration comedy is grounded in particularly powerful dramatic performances at key moments. Leading this charge is Jessica Hardwick and her moving portrayal of a distraught Julia Melville, who’s valiant efforts to combat the neuroses of her would-be lover Falkland are executed with admirable power and integrity on-stage, and acts as the perfect foil to the chaotic hilarity of the rest of the piece.

A special mention should be made of the design as well, as it, like the performances of the actors, manages to bring the audience to within a whisper of Sheridan’s bygone era, and makes the stage feel like simply an extension of the auditorium. With some beautiful sets flying gracefully in to smoothly illustrate a change of scene or location, there is nevertheless still an exciting sense of mystery to the design, with an eclectic collection of costumes, props, and a solitary harpsichord at the back (played evocatively throughout by the singularly talented Henry Everett, who also plays David). It skillfully evokes both the period, in the recurring portrait motif that adorns various aspects of the set and stage, and in the shadowy chaos behind the action that tantalises the audience with a sense of complicity, not only in the finished play, but in the process of playmaking itself.

While one might be forgiven for beginning to surfeit from period pieces (the BBC and the enthusiastic, though well meaning, celebration of Shakespeare this last year might be somewhat to blame here), if your interest lies that way, and you can grit your teeth and persuade yourself to attend yet another, I can assure you that this particular production will be well worth the effort. 4/5

The Rivals is currently showing at the Bristol Old Vic until Saturday 1st October. For more information on the production, visit here…