The smash hit show returns to the Peacock Theatre once again after gracing the stage 2 years ago. It is set in an Urban Lanscape which brings together the Street Hip Hop dance culture. The talented and multi-disciplined cast infuse dance, theatre and circus. Forty Nguyen, Marie Pandora and Bryan Boyer lead the Urban dances and shine on stage when they are in their element. 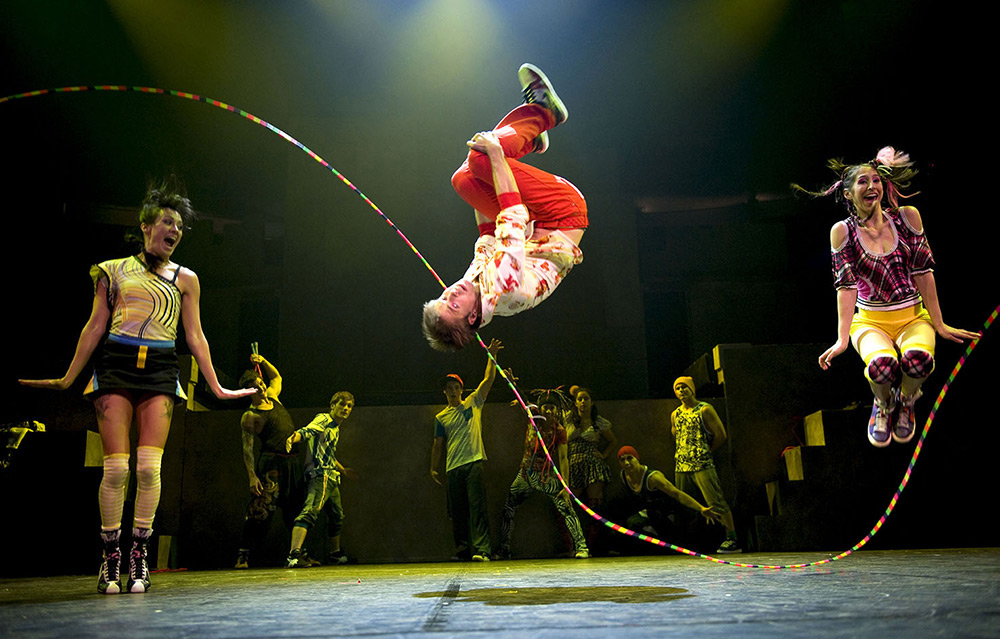 The Trampowall is a favourite performed by Olivier Poitras and Jean-Phillippe Deltell, this is exciting to watch and focus on their linking skills. What really catches the audience’s attention is Thibaurt Philleppe on his daring trial bike. He swiftly navigates his bike throughout the set, on different heights and levels. We all get behind him when he invites a member of the audience up onstage to lie flat on his back as he performs tricks over and above him, inches from the participants face and body. Better him than me! This seems to be a more current and up to date approach.

Diana Gonzalez performs some great tricks on the Cyr wheel which is becoming increasingly popular in cotemporary circus. She also doubles up and performs a solo on a double point hoop. Gonzalez is a versatile performer and is great to see her transfer to Cique Eloize from Cirque du Soleil’s production of Joya. Gabriel Lafrance also joins the Eloize team from the production of Joya. Only graduating in 2014 he is one to watch for the future. Tonight he performs a graceful straps act with plenty of wow moments.

The team’s skipping rope scene brings them together again and really energises them as a cast. Angel Sanchez Saez performs a beautiful hand balancing act on chairs stacked up to the rigging which is mortifying to watch! He performs his tricks with great strength and amazing stage presence. The ensemble feel unnecessary at this point creating small still images on their own chairs.

A beautiful love story is told between a girl on the silks and a boy on skates, two very different disciples merged together well to show some contemporary skills. This show is really exciting to watch and great for a family night out, suitable for all. I can’t help but think however that the show seems formulaic, and lacks originality. The cast and crew are incredibly talented but it just doesn’t feel fresh.

The show is jam packed with plenty to watch, there is a lot to see but it does feel unclear if their physical theatre is actually telling a story. They all start separated as individuals walking through a busy city and end all together in the Cyr wheel, perhaps making a statement of unity. Differences should be celebrated, and I think this message shines through. It is definitely a feel good piece of contemporary circus. Tickets range from £15-£42 which I think is a reasonably priced for the amount of skill you see, merged with great sound tracks, light and scenery. 4/5

iD is currently showing at Sadler’s Wells until Saturday 8th October. For more information on the production, visit here…