The Red Barn based on the novel, La Main, by Georges Simenon shows a man unraveling from his life. The play begins with a cinematic opening, a fierce snow blizzard in the suburbs of Connecticut. Two couples are returning home from a party and get caught in what will be a tragic storm. The production is beautiful, designer Bunny Christie and Director Robert Icke have achieved something masterful here. Mark Strong as Donald Dodd is fantastic. A somewhat meek man, whose actions are often preempted by his wife, Ingrid Dodd, played with brilliant reserve by Hope Davis. 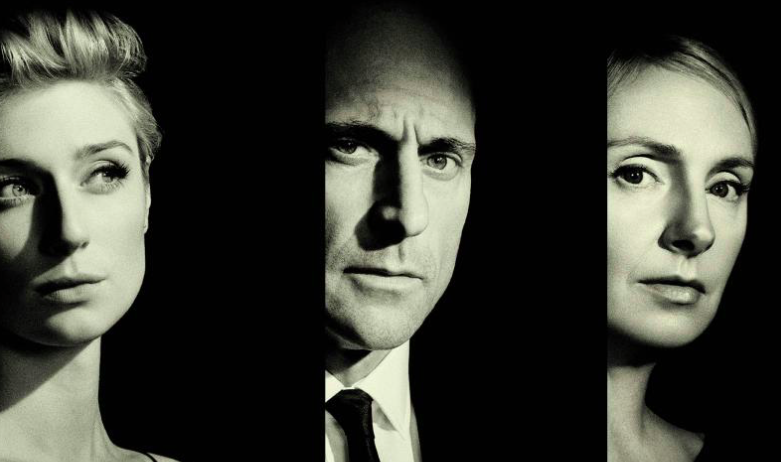 Strong’s performance as the small-town lawyer reaches breaking point when he realises, “I’ve lived my whole life with the handbrake on” . The play is about an ordinary man realising his life’s mediocrity amidst women who seem to overrule him. Hope Davis shines as his all-seeing wife, her controlled performance as Ingrid Dodd, who lets him sleep in the middle as a test perhaps in between herself and the soon-to-be widow Mona Sanders, on the fateful night of the storm. Mona’s husband Ray Sanders goes missing in the storm, never to return. Donald follows his wife’s suggestion and goes out to look for him. Mona played by Elizabeth Debicki appears exotic and alluring to Donald and they embark on an affair. Meanwhile Donald’s home life continues, as the police try to piece together the events of the evening. The play swaps between snippets of the evening of the snowstorm and the present in a non-linear manner, which adds to the dramatic effect aiming to build suspense.

However, while a heavy sense of uneasiness permeates through the scenes, which use moving black boards to frame the scenes, unfortunately the intricate staging requires frequent black outs, whilst at times we here phone calls during these to move the story along. This feels abrupt, it seems a little too manufactured in its attempt to create and maintain the tension. In doing so, it detracts from the story and leaves the viewer with more style than substance.

Icke’s play is a bleak depiction of a man waking up to his own life. The cast is strong and as is the play but perhaps the execution leaves a little something lacking. 3/5

The Red Barn is currently playing at the National Theatre until Tuesday 17th January 2017. For more information on the production, visit here…