York Opera have a long tradition of past performances, placing them as the city’s leading amateur operatics company. It’s great to see so much enthusiasm from the community of like-minded performers, and the wide age range we see tonight reflects the ongoing interest in opera which has enabled tonight’s production of Turandot to be staged with so much attendance both on and off stage at the Theatre Royal. 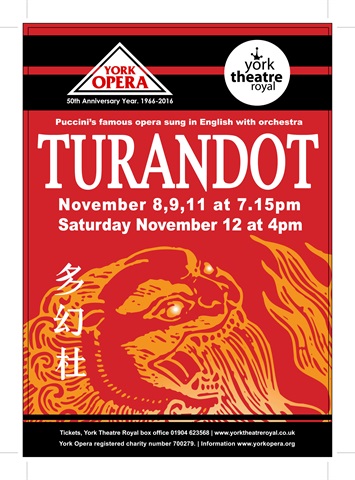 That said, it is an amateurish quality which holds York Opera back from untapping their full potential in this production which delivers strong vocal performances but little else in the way of its theatricality. What starts as a visually promising spectacle judging by the set of imperial reds and golds turns into a series of stilted movements about the stage.
Of course, having a large chorus and a shallow stage (once the stage of Turandot’s palace has been put in place) means that even the most skilled directors and choreographers will have a hard time creating plenty of dynamic movement to fill the three-act opera. However, it feels like the majority of choreography has been used on the principle actors, leaving the chorus to form clumps on either side of the stage. There’s also a bit of confusion among the crowd: for a mob who’ve heard countless times of Turandot’s cruel courtship guidelines, they always let up a gasp when another suitor is challenged with enigmas or death by beheading.
Apart from the muddled crowd’s scurrying and bumping, the visual overall look makes for some excellent tableaux in the show. As the humbly garbed peasants crowd around a resplendent palace it’s clear that there’s been careful consideration and detail given to both the costumes and the set design.
The solo performances are for the most part brilliant showcases of the superb talent found in York. Ione Cumming’s Turandot is an incredibly strong soprano and commands the stage without even saying a word. Her empress level of authority affects her entire performance, and shows her finale change of heart well without seeming completely at odds with her haughty portrayal in the earlier acts.

Alongside her Ben Pieper’s Calaf holds his own: whilst his held notes aren’t as strong in Nessun Dorma as his predecessors may have been, Piper makes the role his own and earns the audience’s affection very quickly. He is gentle with Steve Griffiths’ Timur and this chemistry dictates his unbrutish and unwavering courtship of Turandot.
It is interesting to watch Griffith’s ailing Timur: although exiled and at one of his lowest moments, Griffiths conducts himself with a stoicism with seems almost regal. It’s a stark contrast against Paul Richardson’s Emperor. The Emperor is presented high upon his throne where he remains, a faint reminder of the older generation overseeing Turandot’s suitors. Richardson’s notes feel pitchy and weak: immediately his Emperor loses the command and authority which he should imbue with every word.
There’s plenty of comedy to be derived by the three men in charge of preparing the wedding- or, as it may turn out, funeral- party. Looking past the archaic and problematic names (it’s hard not to cringe at Puccini naming the three Ping, Pang and Pong), the trio of actors Ian Thomson-Smith, Kevin de Sabbata and Hamish Brown share a solid sense of humour which livens up what could be an otherwise static sequence at the opening of act two.
There’s plenty to praise about the individual work in York Opera’s production, but for a younger audience this Turandot feels a little too dusty for engagement.  3/5

Turandot was shown at the York Theatre Royal from Wednesday 9th until saturday 12th  November. For more information on York Opera, visit here…