A series of dark vignettes flicker on and off for the first half of the play. It becomes increasingly palpable that these scenes may have been scripted and the actors we see are acting themselves; we are seeing an illusion, which soon reveals itself. The play has a strong opening, it is not often complete silence is demanded from you, especially in the intimate setting of Jerwood Theatre Upstairs. 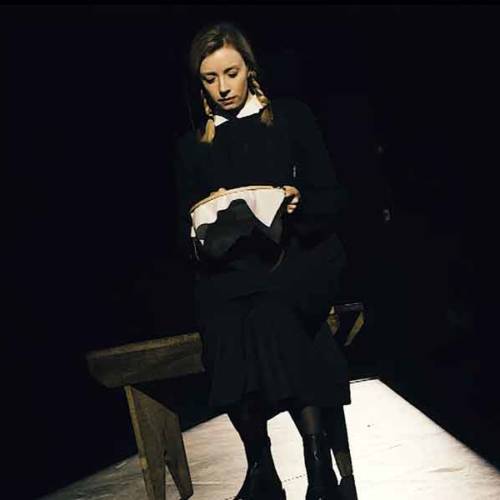 The blackouts used in between moments where three actors are sewing are effective, if a little repetitive. E. V. Crowe invites you to view the performance almost as an exhibition at times; we peer into the simple lives of these rural folk. The story follows three women, known as A, B and C. They sew, they farm and they do not speak unless it is necessary however the arrival of C played by Fiona Glascott, the new woman starts to change things, she asks questions and introduces complexity into their simple lives. She suggests changing the thread colour from teal to red, and then announces she is gluten free. The simple world starts to unravel when the other characters complain that C has ‘ruined sewing’ and is a ‘computer person’. It becomes clear that C is not from this bucolic universe and is attempting to straddle between her technical present and this constructed past.

Finally, C explodes, she starts swearing at the other characters about how she can see patterns in the quilts, and her overtly analytical mind is revealed in the last part of the play. However, she then backtracks by wanting another attempt at the ‘simple life’, which leads her to claim ‘there’s so much history can teach us’. It is a creative play that tickles the audience’s imagination and makes us question just how beneficial the modern life is. C whose real name is Maggie, makes a phone call to her children and ends up leaving a rueful message apologising for her absence in their lives. She appears to be convincing herself more than them when she ends the call with ‘I’m incredibly lucky…these are incredible exciting times!’ The ending is almost sci-fi like, however I will leave this for you to decide.

The story is thought provoking, with strong performances from Sarah Niles and Jane Hazlegrove who play B and A respectively. It explores themes of modernity, the change from community to corporations and the rise of technology. The play however seems a little too restricted to explore these themes due to its running time of 85 minutes and whilst the ideas are innovative, moments of clarity are shrouded with aspects that are confusing and not entirely well executed. Whilst it is an interesting production, it is a little too sparse and perhaps delving into the themes a little further would have resulted in a more refined play. 3/5/5

The Sewing Group is currently showing at the Royal Court until Friday 23rd December. For more information on the production, visit here…