English poet and playwright, Tony Harrison‘s 1988 piece, Trackers of Oxyrhychus is revived for the Finborough Theatre stage by the Proud Haddock Theatre Company. It’s 1907 and 2 archaeologists have discovered what appears to be the remains of an ancient play revolving around the God Apollo. This should be the makings of a play of Godly proportions, however, is this the case? 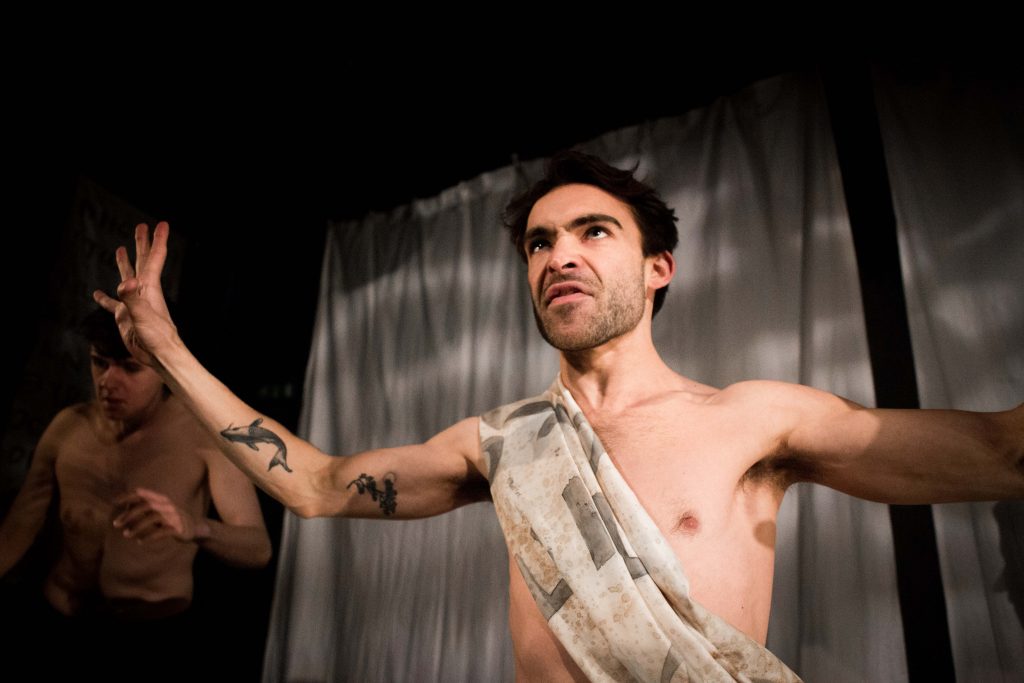 The tale takes inspiration from a 5th Century Sophocles play titled Ichnuetae. The play is one of the oldest Satyr plays to have been discovered, with it’s remains having been dug up in 1912. Harrison marries the discovery of the tragicomedy with a tragicomic narrative to create an ancient tale for the modern day.

The evening begins with Tom Purbeck‘s astute Grenfell reciting Tony Harrison’s poetically rich text. It’s a case of the script truly standing out for its lyricism rather than the performance being projected. Purbeck is respectful towards Harrison’s text, however there is a block; there is room for a sense of authenticity and humanity to shine through. Jimmy Walters directs an ensemble-rich production, the cast vibrantly creating the hoards of personalities present in this mythical tale. Satyrs tap dance, goddesses speak to the masses and hooligans protest. Dylan Mason, James Rigby, Nik Drake, Sacha Mandel, Dannie Pye and Adam Small support one another, they’re all on the same page, careful not to upstage each other which is endearing to watch. They bring an authenticity that is a breath of fresh air to watch.

The narrative however can prove quite challenging to follow and this creates a barricade between the audience and the performance. It’s an ambitious script, and is lyrically rich however doesn’t fulfil the potential it could do due to not reaching the level of intensity required. Phil Lindley’s stage design is a stand out feature. Torn up papyrus scrolls litter the initimate stage and walls are lined with ancient Egyptian text. This promotes a feeling of adventure and mystique and leaves you questioning what secrets this cave could be concealing. Rob Mills‘ projections are also a stand out. They are minimal yet contribute positively to the show. An image of Apollo through a multicoloured filter updates the ancient tale. Images of modern day theatre buildings as well as lyrics to a song help to transport the audience to the modern day.

The production doesn’t quite reach its dramatic potential however there are stand out scenes that really have the audience gripped. 3.5/5

The Trackers of Oxyrhychus is currently showing at the Finborough Theatre until Saturday 28th January. For more information on the production, visit here…