Us/ Them is a recount of the Beslan siege in September 2004. Carly Wijs‘ bold story consists of two characters, a boy and a girl whose names we do not find out achieve a mean feat by portraying two children who are narrating their version of events the day their school was seized by terrorists and over a thousand people were held hostage. 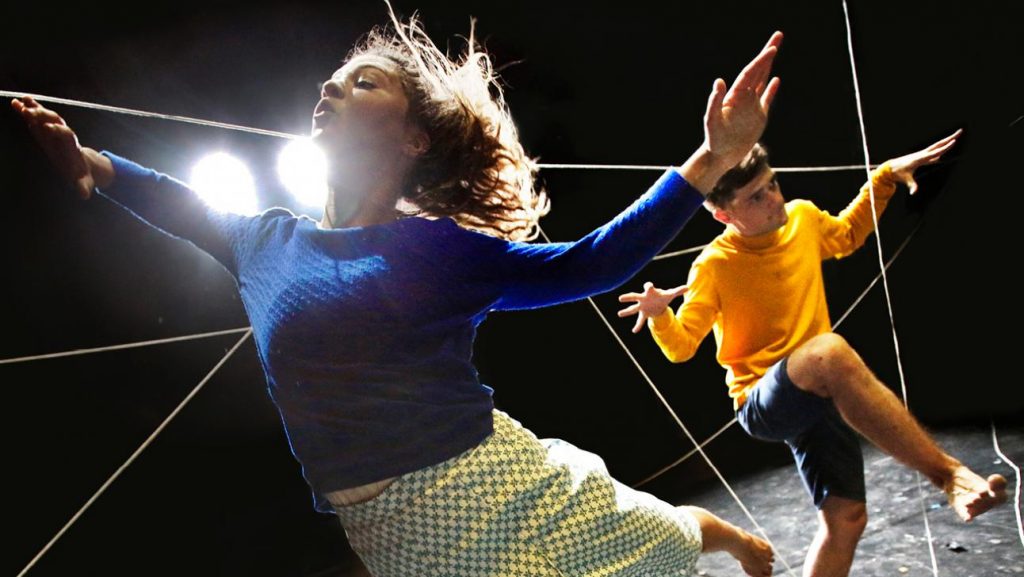 The actors speak together when recounting parts of the story, which is an interesting method employed by Carly Wijs, it is effective in its simplicity and in its representation of how children behave. Her interpretations continue being effective, for instance the detailed explanation on dehydration and how that leads to fainting is at once accurate and somewhat comical. The speech is also very fast paced, another feature indicative of children telling a story. The show catches the audience by surprise in its playfulness and humour, the children squabble over who knows the meaning of paedophile; because for them the word lacks the connotations it holds for adults and is simply another word. Paramentier and Houtven dance, sing and leap across the stage all against the backdrop of a horrific terrorist attack they experienced. A chilling reminder is the constantly updated count of how many people remain alive.

The stage is used in an interesting manner, bare at first and is then slowly covered in string, becoming something out of an ominous gameshow challenge. Balloons are cleverly used to portray bomb explosions, turning innocent childhood objects into something quiet sinister. The concept is somewhat macabre but one that is inspiring in its approach. Wijs takes a brutal event, and does something a lot of parents often balk at; she treats children as equals in terms of their intelligence and maturity and does not sugar-coat something fundamentally tragic. The ending scenes show a new element in the play, the role of the media in such tragedies. Paramentier’s character dies and her image is televised, into TV screens across the world. She states this was always her dream, to be on TV screens, to be famous in this way. A slightly absurd sequence ensues when the kids recount the music each country played to accompany the girl’s image, Chopin in France for example, an image which becomes iconic and symbiotic with the Beslan tragedy. Although perhaps a little too far-fetched for children to understand the media’s manipulation of evidence – the editing of a woman’s sneeze to look instead like she’s crying in grief – the play ends on this criticism of the modern-day media and its role in brazenly dramatising news stories.
There are many pauses through the show, some are more effective than others, at times the silence seems forced, but that is a small criticism for what is a fantastic portrayal of a catastrophe seen through the eyes of those it affects the most. Both actors are excellent in their depiction of children wanting a precisely accurate account of their school’s siege.

Despite the seriousness of the topic, moments of humour and childish bickering ensure the audience never forget the children at the centre of the story. 4/5

Us/Them is currently showing at the National Theatre until Saturday 18th February. For more information on the production, visit here…