German Cornejo’s Tango Fire is a delight to watch, a great blend of dancers enthralling us with their inspired moves. Milonga De Mis Amores by Marcos and Louise is a great opening solo; the gancho (hook) move in particular is on point. 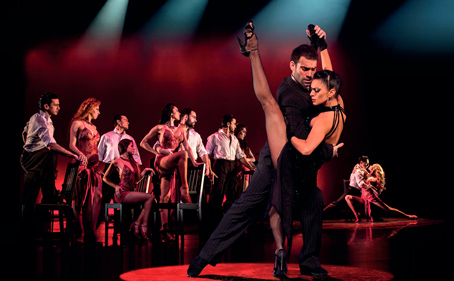 Following that is a great piece choreographed by Ezequiel and Camila in their solo Mala Junta. Then the audience are treated to German and Gisela’s tango clasico – A Los Amigos. Excellent lighting techniques are used where the back of the stage is illuminated red. Their routine has unprecedented levels of fluidity in steps and seeps with purposeful movements. It is a joy to watch.
The tango/milonga performed by three couples is one of the lower points of the show. Sometimes it is hard to know where to look. Perhaps it is better when couples perform solo, as one can see the moves more clearly and usually it is more appealing aesthetically, however some dances have couples on stage watching in appreciation, which gives it an element of reality of how it would be in a real life milonga.

Facial expressions seem to fit better when they are sterner and the dancers’ focus appears on their faces as opposed to smiling, for the most part, the former somehow feels more simpatico with tango. Sebastian and Victoria’s solo Tanguera is fabulous; not only do they display great choreography, they are also incredibly lithe with their movements. The group performance to end the first half is good, the diagonal formation works well and the costumes are also fitting and complement the dance.
The production skilfully sets the scene, despite the stage being mostly a dinner table and lamp with two chairs accompanying several dance sequences. The atmosphere feels vibrant as if you are watching a performance in Argentina.
The first solo, Pata Ancha danced by Mariano and Florencia are extremtly synchronised dancing the tango clasico.

The two solos; Ezequiel and Camila’s Zum and Marcos and Louise’s Gallo Ciegoafter performed to the orchestra’s Revirado are excellent. Once again the precision of movements are mesmerising. The more serious tango reigns supreme, especially in Gallo Ciego as the choreography by the couple is seamless, challenging but not unnecessarily exaggerated.
The finesse in German and Gisela’s performance is enchanting to watch. German’s ability to choreograph such romance and passion, and then execute it flawlessly is a stunning sight to behold. One of the concluding pieces Violentango involves a sheer red material being used in-between the dancers, the material works at times but is distracting when it moves with the dancers. Libertango is an incredible feat of strength, Sebastian makes Victoria appear weightless. There isn’t as much tango in the routine, it being a Tango Moderno however it is still a great piece.
The dancers appear wholly elastic, their movements are so supple that it leaves the audience in complete disbelief at times, especially when they execute ganchos and intrusions in quick succession. Whilst the followers (ladies) often make more decorations with their legs such as cuatro (four) or boleo (whip), their movements are more eye-catching part, whilst men are often the silent stars. The leads show their strength by frequently lifting and spinning their partners.
The orchestra are great, playful and seductive. Violinist Gemma Scalia’s musicianship is soulful and haunting. When playing masterfully the violin can create a feeling of utmost longing which is the perfect pairing for tango. Jesus Hidalgo has a great voice. Soulful and deep, however Hidalgo lacks stage-presence and is not as charismatic as perhaps the orchestra. At times his solo pieces feel like a forced pause between the dances. The orchestra on the other hand is dynamic; their solos seem more engaging than the singer’s. Technically all the dancers are superb and it is an extremely enjoyable evening. 4/5

Tango Fire is currently showing at Sadler’s Wells until Saturday 18th February. For more information on the production, visit here…

« Previous post
The Twits @ The Brighton Theatre Royal Review
Next post »
Are vocal lessons a necessity to a performer’s training?