a profoundly affectionate, devotion to someone @ The Royal Court Theatre Review

Debbie Tucker Green‘s latest play, which she also directs, is about love – a word that has long been trivialised and commercialised but is seldom used when most needed. Tucker Green examines the nature of love focusing on three relationships in three connected dialogues. 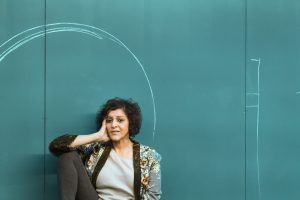 The core of the play is the dialogue between couple A (Lashana Lynch) and B (Gershwyn Eustache Jr). At first a hilarious battle of the sexes with B accusing A of never understanding his complexity and A countering that B’s neediness has drained her to a desert-like state, the play soon changes its tone – the conversation becomes more intimate and painful. Tucker Green shows the breakdown of their relationship as the years go by, their children are being born, sex ceases to be exciting, and their love drowns in grief because B does not know how to provide the adequate support, caring for A in the wrong way, whilst A remains silent.

In the second dialogue a middle-aged couple argue. The Woman (Meera Syal) tells her husband that he never pays attention to what she says: “You never listen. Never listening, not hearing. Pretend hearing.” The Man (Gary Beadle Blair) is trying to interrupt her but he does not have a chance as the Woman vents her frustration. She is waiting for the Man to apologise for a severe offence. The Man retorts that he has never been thanked properly. Who is going to make the first step?

The final dialogue connects the different couples and their lives. A Young Woman (Shvorne Marks), who is A and B’s daughter, is in a relationship with the much older Man (Gary Beadle). The Young Woman won’t talk to her father or siblings. Her siblings are too judgmental, her father B remains silent – and the Man will not listen to what she says.

Debbie Tucker Green’s play is about speaking without connecting, listening without hearing. Her writing is a precise composition of speech patterns, interrupted thoughts and repetitions.

The cast are outstanding. Lashana Lynch and Gershwyn Eustache Jr. as A and B give convincing and touching performances. Meera Syal shows her character’s bitter disappointment but also her vulnerability whilst Gary Beadle’s character remains stoic. Shvorne Marks is very good as the Young Woman.

Designer Merie Hensel has seated the audience on little black swivel stools in the centre of the Jerwood Theatre Upstairs with chalkboard walls, resembling a classroom. The actors walk on narrow platforms around the audience, drawing geometrical figures and lines on the blackboards, symbolising the state of relationships. 4/5

a profoundly affectionate, passionate devotion to someone is currently showing at the Royal Court Theatre until 1st April 2017. For information on the production, visit here…

« Previous post
Win a pair of tickets to Black Lives, Black Words at the Bush Theatre!
Next post »
A Midsummer Night’s Dream @ The Young Vic Theatre