My Country; a Work in Progress @ The National Theatre Review

This is the first major theatre production about Brexit after the EU referendum past June. Enlisting the help of regional arts organisation, the National Theatre interviewed British citizens ranging in age from 9 to 97 around the UK, resulting in hundreds of hours of material. Rufus Norris and Carol Ann Duffy transcribed the interviews and turned them into an 80-minute play which presents an intriguing chronology of the general mood in the country before and shortly after Brexit. 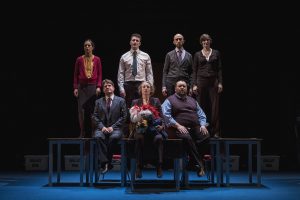 The representatives of the different regions live up to certain stereotypes. Cymru arrives with a song on his lips, Caledonia makes it clear that his presence is just temporary and later storms out to show his independence. The North-East indulges in unhealthy greasy food including pizza with chips on top and the East-Midlands live on curry whilst Northern Ireland “gotta dance” like Michael Flatley whenever the mood strikes him.

Once everyone is present, the actors who speak for their specific territory hold up photos of the interviewees whose testimony they will present. In the opening statements we learn about the class divide in Scotland, a former police officer from Wales complains about a tenant who claims more in benefits than she herself ever earned. A North Easterner remembers when the shepherds still knew each sheep by name and used sheepdogs whilst today farms are industrialised. Britannia, responsible for the political voices, over-represented Nigel Farage and Boris Johnson. Although Farage and Johnson’s sound-bites are always good for a laugh – “My policy on cake is pro having it and pro eating it” – the abundance of Boris quotes further tilts the play in favour of the leave vote.

The impression one gets from watching this production is that of a stream of consciousness, similar to Dylan Thomas’s Under the Milkwood, with Britannia repeatedly asking us to “listen” to the people of Britain and their concerns. And it is quite clear that there is growing resentment against the “elite”, being ignored and neglected by the government in London, and fear combined with anger of a steady influx of EU workers and migrants. There is some humour to be found among the outburst of angry one-liners, such as when a voice from the North-East tells us: “We heard on the news that terrorists are coming into Wiltshire but I haven’t seen any.” Yet most of the quotes concern issues that are of a domestic nature and have little or nothing to do with being a member of the EU and should not have influenced the Brexit vote.

Therefore, I am somewhat bewildered that one crucial factor contributing to the outcome of the referendum is not mentioned in any way – the anti-European press (Daily Mail, SUN and Daily Express) celebrating xenophobia and printing lies about the EU – that informed many of the leave voters, together with the lies and half-truths told my Boris Johnson and Nigel Farage.

Directed by Rufus Norris, the performance is fast-paced and the six actors keep your attention. It is a good production if seen as a chronology of what happened up to the Brexit vote although certain important elements such as the influence of the print media are missing. 3/5

My Country; a work in progress is currently showing at the National Theatre until Wednesday 22nd March 2017 and will then tour the UK. For more information on the production, visit here…