Comedy in the Dark @ The Underbelly Southbank Review

The lights are off at the Underbelly Festival, with the Southbank’s annual comedy & cabaret takeover well underway for another year. 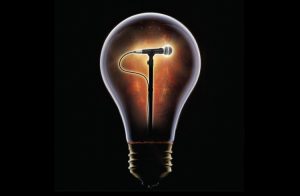 As show concepts go Comedy in the Dark appears to tick all the boxes; recognisable headline acts, a fringe-y pop-up-style venue and an audience plunged into imposing darkness. It feels like the cards are all in the comedian’s favour, so what could possibly go wrong? Compere for the night, Joey Page bounces around the stage settling us in to the inky darkness. A few quips are fired at members of the audience, which are at times sparky and well received.

Our first guest for the night is Chris Betts, Canadian comedian with a penchant for crass, lad-ish gags. Admittedly, his jokes aren’t my kind of humour, and it seems they aren’t quite to the taste of the majority of the front few rows either. His punchlines are a tad tired and old for a Southbank audience. Betts doesn’t  give the impression of being on best form, which is understandable when you think stand-up is so reliant on catching and reacting to every murmur made by the audience- with the lights off it feels like he can’t quite gauge the vibe of the room.

Next up to face the murkiness of the stage is Lloyd Griffith who’s playful humour with Page shows he is going to bring a refreshing brightness. Griffith’s performance exudes like-ability, commanding the room with a charming easiness. His humour feels modern, performing a series of surreal impressions of adhesive tapes, which is as a real highlight of his set. Give it time and Griffith’s loveable, choirboy-come-comedian schtick will make him a house hold name.

Back to Page, who’s rapport with the audience feels a lot more comfortable now, particularly when jibing with a vicar from Clapham in the fourth row. Headliner act, Tony Law, takes to the stage intriguing us with his whimsical and meandering ramblings. Law works hard pushing his surreal style of humour to the max with his vocal delivery, compensation for an audience blind to his regular visual manner. Law attributes this downfall frequently in his set and his enthusiasm seems to tail off towards the end.

For a show that had a lot of promise, so much it’s downfall was in its concept and programming. The line up offered very few distinctive moments of full bodied belly laughs and didn’t quite fit for a diverse London crowd. The night was spent in darkness and a lot of the jokes fell in to the awkward emptiness. Though there are some glimmers of joy, a lot of the show feels like a dull fluorescent office light, flickering but never quite getting there. 3/5

Comedy in the Dark is currently showing at the Underbelly until Monday 3rd July. For more information on the production, visit here…

« Previous post
Everything Between Us @ The Finborough Theatre Review
Next post »
Leon West End Waiter and Singer Aaron Rahn talks about his unique job role!