The Union Theatre’s Romeo and Juliet by William Shakespeare and directed by Andy Bewley is tackling the subject of homosexuality within sport head on, and is showing us that Shakespeare is still relevant in the 21st century. 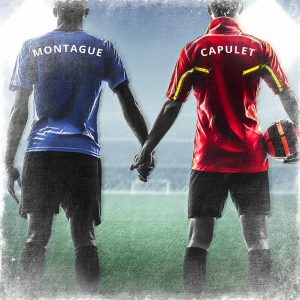 The whole play is set on a football field, the stage is covered in grass and team benches are positioned opposite each other. The Montague’s and Capulet’s are played as two teams collecting their kit bags full of token costume for their characters. Romeo (Abram Rooney) starts the first half of the show strong; the ‘typical’ Shakespearian Gentlemen, whilst showing off impressive footwork and skills with a football.

The theme of Football shockingly doesn’t  seem strange to pair with the classical play, it almost complements Shakespeare’s work adding new stakes and another dimension to the story. Juliet played by Samuel Perry really shows off in the second half, showing that Juliet shouldn’t just be thought of as a simple 14th Century woman, rather a strong yet emotional lead that could be played by any gender. Romeo and Juliet’s relationship is really lovely to watch. The boys really capture young love perfectly and I find myself forgetting the play was written for a man and woman

Romeo and Juliet are also joined on stage with a great supporting cast. They really show the differences of the two teams and create great live music throughout. Gabrielle Nellis-Pain who plays the Nurse, a Montague and a part of the chorus really stands out. She is funny and seems completely ‘in’ the show from the beginning. Over all, it is a really interesting piece. I have to admit I do think there are times where the football theme lacks, but every time they bring it back, introducing it in a really fun and innovative way.

I love the idea of changing gender and sexualities in classical theatre! I feel like I am being told such a classic story all over again for the first time, and I’m not bored at any point. It is also a really clever way of getting across such a serious message. Homosexuality within sport, especially football isn’t talked about or broadcast enough and I think it’s really cool that they are opening up the topic and telling people about it in a really creative way! I’ve had a really fun night and would recommend it one hundred percent! 4/5

Romeo and Juliet is currently showing at the Union Theatre until Saturday 20th May 2017. For more information on the production, visit here…