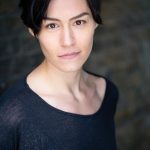 Recipient of this year’s Les Enfants Terrible Greenwich Partnership Award with their latest venture Goody, BoonDog Theatre is set to take the production, an exploration of the relationship between a performing ape and a human being to this year’s Edinburgh Fringe Festival. Ahead of BoonDog Theatre’s month long run, writer and actress Lucy Roslyn talks more about the production here.

Hi Lucy, your play Goody will be performed at this year’s Edinburgh Festival (Pleasance Courtyard). How are you feeling ahead of the run?

We are delighted to be bringing a show back to the festival. It’s a very inspiring place, we’ve met incredible people there over the years. In terms of the run I am very proud of the play and my team. However putting on a new piece of work is always very hair raising. Ever since we committed to the festival my hair has been on end. I am going to embrace the look.

Goody is an exploration between man and a performing ape. What inspired you to create a piece exploring this bond?

I read an interesting article about performing with animals that described, in a nutshell, that the act is either about acrobatics or courage, but with apes the act is about kinship. To either have the bond or, most likely, to force the appearance of one. I liked the idea of a very close relationship but with this undeniable barrier of communication. With or without love in the act there would always be inequality and misunderstanding. There is dependency and danger from both sides, and not always the ability to make it understood.

You conducted research for the play by visiting ape sanctuaries, zoos, interviewing animal handlers and you also read up on case studies of performing apes. What did you take away from the research?

I took away from the research that mankind is a monster. Then occasionally mankind would also be an incredible hero, but the imbalance of these two things is maddening. I went into it knowing the research would be a rough ride but the detail of it was heart-breaking. How do you make people understand that the longevity of a creative process is worth more than immediate gain, worth more than a goofy trick. I don’t know where you’d begin. People we spoke to from sanctuaries and zoos have incredible and respectful knowledge of their apes. They have sweet relationships with them and know their individual personalities. They know how these apes have been shaped by their experiences and sometimes bent out of all recognition. Those who have survived this journey now enjoy life in sanctuaries – as much as they have started from scratch to be apes again and have loved ones, in your heart you know they shouldn’t be there and can never return. I also took away that they are wildly impressive blocks of muscle and energy – which I am not.

I hope it will surprise them and I hope they will enjoy it! In many ways it is a Frankenstein story. As much as it is about my research it is mostly about a deep relationship, about trying to talk to each other. About family. 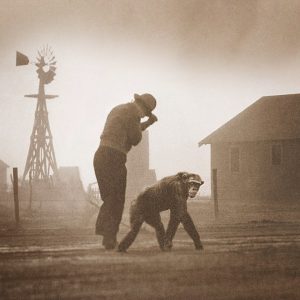 Goody also explores the theme of communication. Are there any personal experiences that you took inspiration from to write the play?

A few years ago a member of my family lost their hearing and, for a period, we lost the ability to fully understand each other. All the obvious things were snatched away. It was like someone had kicked the leg out from under the table.

Goody is the recipient of this year’s Les Enfants Terribles Greenwich Partnership Award. How does it feel to have won the award?

I am absolutely over the moon! It has been a while since I put some new work out there so it was a real confidence boost, especially as we were up against such strong and diverse pieces. I am delighted to have the support of Greenwich and Les Enfants Terribles, I love their work. I wish I had been less of a dork when I introduced myself my but I was too overwhelmed by the award.

Will you be watching any shows at this year’s festival? If so, what are you looking forward to watching?

I am looking forward to Jayde Adams‘ Jayded, Colin Hoult‘s Anna Mann in How Do We Stop The Fascists, my friend Cat Loud‘s cabaret show will be up again which was lovely last year and I am hoping they will suddenly announce that Le Gateau Chocolat will have a show. Otherwise I will watch anything anyone recommends really. If I am not sleeping, I will watch it. Maybe… just maybe, this will finally be the year I will get a ticket to Daniel Kitson‘s show before it sells out.

I always test drafts of my plays out on a handful of people I trust. It is helpful to have your ideas challenged and questioned. For my first play The State Vs John Hayes I ran it with my team, other writers, a psychologist (it was psychological thriller). They could see it from a different angle and hopefully this made me a better storyteller. Other than that, just go for it. You have to be in it to win it. Good luck!

Goody will show at this year’s Edinburgh Festival at the Pleasance Courtyard from Wednesday 2nd until Monday 28th August. For more information on the production, visit here…