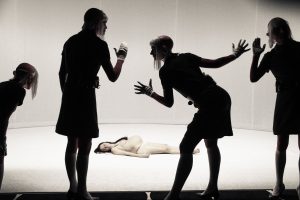 Olga Bach‘s play Das Erbe (The Legacy) describes a community which, having become alienated from the present, communicates exclusively through its common cultural heritage – the archive of German cultural history. The pressing question is whether this legacy should be sacrificed to make a new beginning possible as the community is leaving Earth..

An androgynous group of six humanoids with red skin and white hair, dressed in schoolgirl uniforms, are standing in line reciting numbers in the six-figure range that represent pieces of evidence that have yet to be examined – evidence of human failings. A door opens to reveal a highly pregnant woman resembling Beate Zschäpe – the seventh passenger and the representative of their guilt. As the evolved humans look through centuries of cultural history, starting with Lucas Cranach the Elder and Oedipus by Sophocles, the Beate Zschäpe double, dressed in a nude suit, is either led across the stage by members of the community or behaves like a little truculent child, seemingly unimpressed by the evidence presented to her.

There is no story, the evening consists of a collection of associative texts – the classics by Sophocles, Heiner Müller, Kafka, and Schiller, popular phrases by comic book hero Spongebob and advertising slogans from the 1950s by Dr Oetker, judicial transcripts and political speeches. The cast are meant to remain distanced from the texts they are presenting. Should a speaker try to identify with their text, the other members of the community provide fake applause to show their disapproval.

Ersan Mondtag‘s production transforms the text into some impressive images but the main attraction is the stunning stage design by Rainer Casper. The black floor and walls are decorated with white drawings representing a library and an art gallery – the cultural legacy of the community. A curtain in the centre hides sliding doors that open to a different room. Fluid portraits morph into different individuals, including Beate Zschäpe. A screen above the stage shows projections of Earth as the spaceship increases its distance from the planet towards a new home. An usher covers the exit sign with a small screen to achieve complete darkness in the auditorium to thoroughly enjoy Rainer Casper’s spectacular lighting design.

Das Erbe examines the complexity of guilt as it has been dealt with throughout history. The Beate Zschäpe double is a representative of this guilt and carries the spawn that will commit further evil. She eventually gives birth to a human brain, which might be a bit over the top.

Director Ersan Mondtag, whose productions „Tyrannis“ and „Die Vernichtung“ (also by Olga Bach) have been invited twice in a row to Berlin’s Theatertreffen with the productions „Tyrannis“ and „Die Vernichtung“ (The Destruction, also by Olga Bach) states in his production that art fails to cope with reality. There is no catharsis in the end, our guilt remains. A rather unsettling thought. 4/5

DAS ERBE is currently showing at the Münchner Kammerspiele until Tuesday 4th July 2017 and will then return after the summer holidays. For more information on the production, visit here…

Associations linked to the NSU by Olga Bach, Ersan Mondtag and Florian Seufert