Bring on the Bollywood @ The York Theatre Royal Review 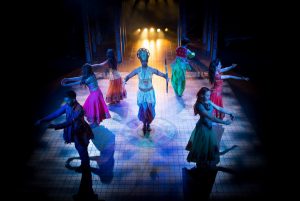 A lighthearted, romantic comedy with plenty of music and dance throughout. A story of a young intelligent and very attractive doctor, (played by Nisha Aaliya, a Miss England finalist) Katrina living in London, who decides to visit her family in India.

Her upperclass parents want to see her married, and have already arranged for her brother (who’s obsessed with the gym and flexing his biceps) to marry a suitable bride.
As things turn out, her brother, “Lucky”and his bride to be are not interested in each other, and Katrina isn’t about to marry someone she doesn’t want to either.

On the flight over she sits opposite Ronnie, who she’s instantly attracted to and bumps into him while in India. She grows to really like him, only for his estranged wife to turn up. Meanwhile Lucky tries to orchestrate a plan with Amit (Ronny’s cousin) to see if they can get Amit and Jo (Lucky’s bride to be) together as they have apparently been in love all along. Are you keeping track?

After talking to their parents all turns out well in the end with both couples being with their choice of partner, while leaving Lucky more time to workout to his hearts content…
All in all, a feel good show with plenty of dancing and a fabulous kaleidoscope of colour both on set and in the costumes.

Some good songs, especially the native ones, sang well by Ronnie (Robby Khela) sounding very majestic. The rhythm and energy of the production transports you to downtown India and opens your eyes to the culture hidden within local tradition.

With a few laughs here and there too, mostly down to Amid and Lucky’s characters, it’s definitely worth going to see. 3.5/5

Bring on the Bollywood was shown at the York Theatre Royal from Tuesday 11th until Saturday 15th July 2017. For more information on the production, visit here…