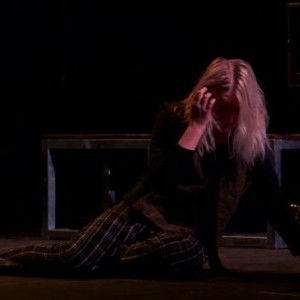 Icelandic theatre company Rokkur Friggjar explore this concept with their aptly named production Hero. How do we learn about heroes? Who are heroes? Who are our heroes? Are heroes important within a society, if so why? Can anyone be a hero or is it destined for certain people? These are questions, and there are plenty more that are brought up during the evening, whether subtly or overtly. The evening places the ensemble at its centre, an endearing motif that makes it easier for the audience to gravitate towards the protagonists. Set initially in a classroom, the ensemble  dutifully listen to the teachings of their astute teacher, whilst establishing friendships and relationships with one another. The innocence of childhood is established here, the juxtaposition between austere authority and rebellious youth keeps the first part of the play dynamic.

War is the evening’s backdrop, the school a safe haven for the cast. Specifics of the war are never mentioned or made clear, a faceless monster left for the audience to imagine. One by one the male cast volunteer their services to fight the enemy. The show’s structure effectively depicts how each male is drawn to fight for their country however as the pacing is slow, loses its spark. Hero tracks the lives of these normal people from childhood to young adulthood however this journey needs to be sharper.

Big themes are peppered throughout the narrative; youth, history, relationships, love, war, ‘the other’, propaganda and aspiration. This just goes to show how ambitious this theatre company are in regards to addressing a multitude of issues, these issue you could argue are bi-products of war and are inextricably linked. In turn as there are many issues to tackle not all are fully realised. Heroism is partially explored on a larger scale, fighting for one’s country and the recognition achieved after successfully doing so. There is an attempt at depicting heroism not as a vision seen through rose tinted glasses, rather the volatile journey taken in order to achieve it and that’s to be admired. 3/5

Hero was shown on Friday 28th July at the Etcetera Theatre. Hero is currently showing at the Edinburgh Fringe Festival (Summerhall) from Friday 4th until Monday 14th August 2017 for more information on the production, visit here…