Before I came to Edinburgh an article was written which discussed the increase of medical shows coming to the festival this year, perhaps a reflection on the current political and economic turmoil. Gutted was the cover photo for the article, as it shares a personal experience of living with ulcerative colitis (an inflammatory bowel disease). An informal education with a refreshing personal insight in the NHS system, Liz Richardson invites us to witness her bodily functions in all their glory. 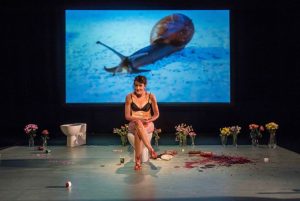 Originally a stand-up comedy show, Gutted combines interviews, conversations and characterful commentaries. Richardson moves around describing the condition and experience with a tactile approach, which reads as accessible. Multi-rolling as the people who feature in her personal history, the dialogue is a pertinent statement on the interactions and relationships built whilst calling a hospital home. Refreshingly, Richardson thanks the NHS system for caring and tending her during a painful period of her life, requesting to never hear anyone moan about the jobs they carry out.

Described as an invitation to talk, audience participation is used to perform the roles of Luke and Mum, Richardson’s closest abetters and therefore hardest characters to portray. In this the fourth wall is broken creating an open dialogue between audience and performer. Enticing spectators with cake and beer, they are asked to read aloud excerpts detailing the commentary on her condition.

Co-creators Liz Richardson and Tara Robinson have taken years of suffering with illness and given birth to a show that reads as a proclamation of strength and stamina. Giving voice to her previously acquainted stoma and ileostomy bag, Gutted draws largely on physical comedy accompanied by charismatic muzak. In the context of Richardson’s illness the backdrop of food video clips make you feel sick in the most polite manner, but it is undeniable that this is the desired affect. The delivery of this show is endearing, and in the moments of anger or frustration you sympathise with Richardson, refreshed to hear the taboo cracking under the umbrella of personal health. I leave the production never wanting to see a pro-biotic yogurt ever again. 3.5/5

Gutted is currently showing at The Pleasance Dome until Sunday 13th August 2017 as part of this year’s Edinburgh Fringe Festival. For information on the production, visit here…