It seems that the criteria for performing at Fringe this year is to produce a solo show, multi-rolling your way to cheaper production costs. The fifth solo show I have reviewed at Fringe 2017, Tumble Tuck is a refreshing culmination of descriptive writing and fast paced action. Writer and performer Sarah Milton considers a world where medals don’t need to be won in order to proclaim personal success. 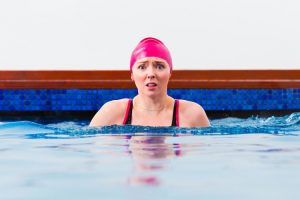 First presented by the Old Vic New Voices and then The Soho Theatre in Autumn 2016, Tumble Tuck is produced by BackHere! Theatre. Directed by Tom Wright and featuring original music composed by Harry Blake this show throws you into the deep end. Immersed in the chlorine smell and blue wash lighting, the audience are exposed to the place where Daisy attempts to seek refuge. Simple in its execution a set is not required to tell this story, instead Milton’s physicality takes us to the pool and beyond.

Horrified by the crime of her ex-boyfriend, and deceit of her best friend, finding escape in swimming, Daisy is offered the opportunity to compete in the swimming relay competition, but her legs still jiggle and her front crawl is ‘a bit f*cking feminine’. Reflecting on body image, whilst placing performer Milton in a swimsuit, she grabs her fat in an expression of self contempt. Abject taunting from Mum, Daisy is the big girl who believes that winning medals requires the sacrifice of making oneself sick. With the revelation that swimming should be for her own gain, Daisy in the end says to coach Danny ‘I race me. The rules are mine’.

To do something in a girl way is a phrase we are all too familiar with, but Milton shares a fresh perspective. Themes explored in Tumble Tuck are present in our everyday life, we discuss them most of the time, from the way we look to the measurement of our success. Milton’s writing gives them a refreshed vitality, her personal framing of events is accessible and relatable. Energetic and engaging I leave the production wanting to go for a swim. 4/5

Tumble Tuck is currently showing at the Underbelly until Sunday 27th August 2017 as part of this year’s Edinburgh Fringe Festival. For more information on the production, visit here…