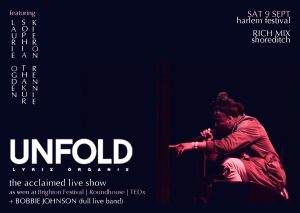 Appreciative of the artistry of words, Lyrix Organix curate an eclectic evening of spoken word, song, poetry, analysis and rap. Unfold‘s aim is simple, to spotlight the brightest talent in the UK literary scene. First up is Ara Harmonic who starts off the evening with a selection of tracks including ‘Pickpocket Love’ and ‘Size 10’, touching on themes very relatable to young women of today. Ara’s method of producing her own backing track by utilising a loop pedal showcases not only her creativity but her skill to improvise which is to be commended.

Next up Sam Berkson presents a lecture-style performance, bridging the gap between the works of UK rapper Roots Manuva and celebrated poet of the Romantic period, William Blake. What links the 2? Well, their ability to follow convention yet create their own rules along the way. Their rebelliousness setting them apart from their peers, Berkson also touches on both poets dealing with mental health issues. Having been quoted for saying there’s a fine line between sanity and madness, it’s as if both knew/are aware of the limbo they find themselves in, justifying their genius as a bi-product of their mental state. Delivered in an informal manner, Berkson’s ability to engage the crowd on a rich topic such as this is testament to his knowledge and passion towards the subject, this in itself would make for an entertaining stand alone show.

The evening concludes with spoken word from three bright talents. Keiron Rennie effortlessly storytells, taking the audience on a varied journey from slavery to heartbreak. Rennie displays a calm that demands for the audience to listen. Next up, Laurie Ogden lightens the mood with a charm that immediately has the audience on side. Conversational in her approach, its apparent she wants the evening to be a dialogue between artist and audience rather than it being passive. Tackling themes of the future, sexuality and London life, Ogden grips the space with her authenticity. Sophia Thakur exudes confidence and charisma. Her chilled out persona winding down the evening’s line up. Addressing themes of woman hood, stop and search and dancing, Thakur shows that she is willing to cover a wide range of topics, showcasing her versatility as a poet.

Video projections by illustrator Joanna Layla and Lizzy Rowlatt give the evening it’s identity. Layla and Rowlatt beautifully highlight the worlds in which these poets have created, highlighting certain words and images with striking designs. A live orchestra also accompanies the artists, this collaboration between musician and poet really helps to establish the evening’s mellow yet empassioned mood. 4/5