Set in 1950s South Africa, The Suitcase tells the story of young couple Timi and Namhla, who leave their village seeking success in the city. Their dreams of a bright new life are short-lived when Timi is unable to find work. He is faced with a moral dilemma when a suitcase is left on the bus. Little does he know, his decision will have a grave impact. 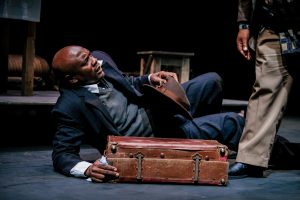 Artistic Director James Ngcobo took this piece from a short story written in 1954 and turned it into a theatrical production. He is keen to portray that this is a love story, a love story set in a time of anarchy in South Africa. He wants that anarchy to be visible, but to remain in the background throughout the story. Listening to James talk it’s clear he loves the art of storytelling on the stage. He is a firm believer in the truth of the story. His cast back him up in saying he has on many occasions told them “The only thing you take on stage is your truth.” He presents this truth in a unique way, he allows a lot of interpretation in his presentation. He encourages the audience to imagine what the characters are looking at or talking about rather than telling us.

With equal measures of tears and laughter, this show tells a very serious story in a very humorous way. The audience quickly become involved in the production with the actors treating us as members of the cast. By doing this, they manage to make a rather small cast seem suddenly bigger. It’s clear throughout the production that the focus is entirely on the story. That is made apparent from the minimalist set and the interchangeable cast. All the actors play more than one character, swapping seamlessly between roles. With a mixture of language used, the quality of the acting is made clear when the audience can understand what is happening even when they are not able to understand what is being said.

There is an almost constant stream of African music throughout the show, so much so that you almost forget it is there at times. Hearing from cast member Molatlhegi Desmond Dube after the show, he was keen to explain that, “people on the African continent are people of music and it is an integral part of their everyday lives, during good times and bad.” This was very much reflected in the production, it is clear throughout that it is not a musical, that it is just a means of expression.

Although this play is set specifically in South Africa and is a depiction of the times, the overriding story is something that almost anyone from any walk of life can understand the sentiment of it. This is summed up by a particularly profound line, “Dreamers from the village, they come with nothing but a pocket of dreams“. This plays into the nostalgia of our own dreams, and that we all aspire for something more. 4/5

The Suitcase is currently showing until Saturday 16th September 2017 at the Northern Stage Theatre. For more information on the production, visit here…