Top notch entertainment that will have you practically jiving out of your seats, transporting you to the forefront of Rock ‘n’ Roll as we all know it today. Who could have predicted that one small lonely studio in Memphis, Tennessee would be responsible for moulding such talent as Elvis Presley, and that one man, somewhat shadowed by his success stories, could become one of the most respected music producers in the world? Sam Phillips, the once young part-time announcer for a local radio station, was about to create international music history! 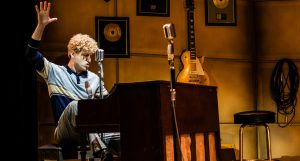 The story begins as the new and upcoming Mr Jerry Lee Lewis joins Sun Studios in hopes of following in the footsteps of great legends before him. Guitar hero Carl Perkins, country influenced Johnny Cash and of course, the one and only heartthrob, Sir Elvis Presley. However, when these four power houses meet for probably one of the most famous jamming sessions on the planet then that becomes a staple in music history and, in the case of this live musical, a fitting tribute.

The piece has it all, jaw dropping guitar solos, a meaningful and yet fascinating storyline, but above all else it is like a Michelin starred feast of golden age hits that would take top of the pops far too long to broadcast in a single episode. Four men that perform so differently and yet inhabit a shared deep rooted enthusiasm and ambition to succeed in an ever-growing and extremely challenging music industry. A particular favourite performer of mine however is that of Elvis Presley’s squeeze and all around glamour puss Dyanne. As the only female on set, actress Jennifer Caldwell makes the men work for the spotlight and demonstrates a vocal ability and tone that is ‘pitch perfect’, to coin a phrase. A nice added extra to support the whirlwind of classic tunes whistling off the stage and possessing the various ages of audience members to, putting it bluntly, shake what their mother gave them.

Actor and presenter Peter Duncan is also a welcomed surprise as the famous Sam Phillips, showing a great maturity in this new role, that counteracts a lot of his previous work on Blue Peter and elsewhere. Duncan is too busy however handing out contracts on set than mere Blue Peter Badges. The musical really is a tribute to Phillips, and Duncan makes sure that, although not cast as a world class singer, this role gives the audience a chance to really meet the possible creator of Rock ‘n’ Roll.

Drawing to a close we witness the quite unfortunate separation of Johnny Cash and Carl Perkins from Sun Studios, and a rather depressed Sam Phillips wondering whereabouts his company will end up once their gone. However, although in the moment all seems bleak Jerry Lee Lewis is about to release a major record and Roy Orbison has been discovered by Sam to join Sun Studios in the coming season. Not a bad result following a major break up, but neither is Phillips investment in the Holiday Inn cooperation, at the time a small nest egg but one that will soon hatch a great fortune. It is as though Sam Phillips has the ability to look into the future and bets on the winning horses all the time as a result. You never know…time lord?

Overall, fast, full on and first class entertainment by a talented cast and director, Ian Talbot. Plus a loud shout out to musical director Philip Murray Warson for his attention to detail in crafting the actors into such uncanny resemblances to the original stars. A treat, with real vigour, wit and energy, and that’s just Jerry Lee Lewis and his uncontrollable tapping right leg. This is as close as you are going to get to the actual legends so don’t miss a chance to throw your undergarments at Elvis. Thank you, thank you very much Million Dollar Quartet! 4/5

Million Dollar Quartet was shown from Tuesday 19th until Saturday 23rd September 2017. For more information on the production, visit here…