A pleasant enough piece by an upbeat collection of actors, but unfortunately not quite a knock out performance overall. Jane Austen’s much loved romantic thriller Pride and Prejudice is well adapted partly I feel by the Mock the Week comedian Sara Pascoe, in the sense that it adopts a well thought out series of puns that really tickles at the core of Austen’s work. However, in parts it feels like watching several different versions of the story all at once. 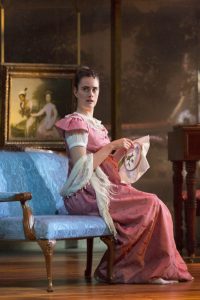 Courtesy of the York Theatre Royal.

Part musical theatre, some slapstick comedy, an educational outlook, a rehearsal room point of view and then an editor’s love story scenario. It is like an energetic American travel rep, on several bottles of tequila, taking you to the circus, overpowering, far too much going on and, as a result, confusing and off putting.

What is so rich and rewarding about Pride and Prejudice is that it follows a group of young females, with little freedom and independence, and allows one to appreciate the childlike qualities these characters can actually feel, during a time of strict traditional values. Men of power and wealth were prey for mothers such as Mrs Bennet (Kerry Peers) who just wanted their daughters wed and gone as quickly as humanly possible. I’m sure a lot of parents out there today can relate.

The two male leads, Matthew Whitchurch and Matthew Roman (both drama school alums), both seem to highlight a sense of authority as the gentlemen callers. Distinguished in his khaki green coat Mr Darcy puts on a brave front as a harsh, bureaucratic and none feeling individual, until he becomes smitten with the Lady Elizabeth Bennet (Bethan Mary-James), who allows him to relax and open up emotionally. The play delivers a cute, almost tragic innocence, to the two lovers, but does not unleash the romantic flare and passionate chemistry we expect of Austen’s work. Leaving one chuckling in part, but not following the thread of a much deeper story and concept.

Overall, Pascoe brings the perfect puns to this pleasing performance, however leaves one perplexed and positively puzzled. Too many ideas flying around that need stapling down to avoid the whirlwind of confusion that the audience are engulfed in. This perhaps deters from the actors delivery of the text, adding lines and ideas that are too many to handle. The cast should take pride in the work they have achieved, but I cannot help being a little prejudiced about the adaptation and execution of the performance as a whole. Don’t worry folks my bad jokes are here all week! 3/5

Pride and Prejudice is currently showing until Saturday 14th October 2017 at the York Theatre Royal. For more information on the production, visit here…