Anna-Sophie Mahler‘s musical theatre production premiered at Kammerspiele – Kammer 1 – in November 2015 and was subsequently invited to the Berliner Theatertreffen. Her critically acclaimed adaptation of Josef Bierbichler‘s 2011 novel Mittelreich returns to the Kammerspiele this month after Anta Helena Recke’s “black copy” of the production was presented in October and well received by her audience. Recke’s production of Mittelreich was an exact copy of Anna-Sophia Mahler’s work using a black cast and I am curious to see if my perception of the production would be different seeing it with the original white cast. 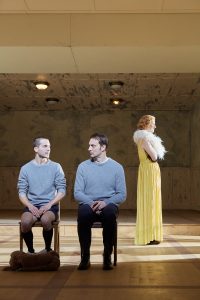 Josef Bierbichler’s family saga covers almost 100 years of German history, from the beginning of World War I to the 1980s. Set in a Bavarian village, the novel focuses on three generations of innkeepers. Being primarily an opera director, Anna-Sophia Mahler searched for a musical connection that she could relate to and found Das Deutsche Requiem by Johannes Brahms, which is mentioned in the book as part of the memorial service for the father – the Seewirt, a wealthy innkeeper and farmer. Framed by the Seewirt’s funeral, Mahler uses Brahms’ requiem to structure the play and to trigger fractured memories as the Seewirt sees himself as a young man and watches how the past catches up with him. He finds that there is no consolation for him, the message of the requiem – “They shall be consoled” seems void.

The patriarch of the family, the Seewirt (Stefan Märki) is dead. Prominent people of the village deliver eulogies before the Seewirt gets up from his chair and lies down whilst the cast and choir sing Brahms’ requiem. He then gets up and hands over his coat to his younger self, then watches as his story unfolds.

The young Seewirt (Thomas Hauser) has been spotted in the church choir by a chamber singer (Anette Paulmann), who now gives him expensive singing lessons. As his older brother is heir to the inn and farm, the young man has to choose a different career path for himself and he is dreaming of becoming a singer. Yet when his brother returns from the war with a head wound and mentally impaired, the young Seewirt has to choose between becoming the heir or being left with nothing.

As the action jumps to the end of World War II, the actors take turns narrating the story. Bombed-out families from Munich arrive at the inn instead of their usual summer guests and theirs, the Seewirt’s wife (Anette Paulmann) is not amused. When her husband returns, he suffers from amnesia and cannot seem to remember anything that has happened during the war. Soon displaced Germans from East Prussia and other parts of former East Germany flee to the village whilst the locals watch them with “murderous eyes” because they don’t belong there. Victor Hanusch (Jochen Noch), representing one of those displaced people, is hired by the Seewirt who appreciates his company and uses him as a confidant. The Seewirt is still suffering from having to give up his dream and feels burdened by his property – he is now one of the “middling rich”. But a storm is coming.

In Duri Bischoff‘s stage design, the walls and floor are kept in pastel colours. The stage is bare except for six plain wooden chairs lined up downstage. The choir is placed in the dress circle near the doors. When the wall opens and the back of the stage is displayed, Bischoff presents a grey wall with flaking paint, representing the past.

Anna-Sophie Mahler’s production can be considered a funeral mass about the German post-war era. The performance begins and ends with a funeral. The Seewirt returns from World War II, traumatised and refusing to talk about his experiences. His son is sent off to a boarding school run by monks where the boy suffers sexual abuse, but nobody believes him. His mother is diminished to a mere reproduction machine and blamed by her husband for their failed lives. There is no room for consolation in Mahler’s requiem.

After having seen the original I would like to make some additional comments on Anta Helena Recke’s copy. I found that it did not matter to me whether I was watching a black or white cast in Mittelreich. This might have been different if Anna-Sophia Mahler had directed a realistic production, had the characters spoken in a Bavarian dialect and had set the play in a distinct Bavarian village. Yet Mahler’s production is not naturalistic and could take place anywhere because the themes are universal. I think that the cast in the original production was better than in the copy, with one exception. Victor Asamoah‘s performance still stands out – although Jochen Noch is very good as Victor. 4/5